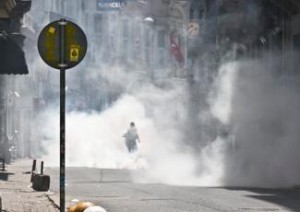 You are never quite able to forget the first time you are teargassed. If you’re fortunate, you see the tear gas first being deployed and have enough time to make sure you avoid the canisters’ ballistic paths (police often aim for your head when firing them). Immediately after, the loud hiss of the gas pouring out of the cans drowns out every other sound while white clouds rapidly fill the air and engulf you, obscuring your vision and forcing their way into your body through your lips, eyes, ears, and nostrils. The sharp burning in your lungs and sinuses brought on by the gas leaves with you with the sharp impression that you’re not getting enough oxygen, causing you to desperately gasp for more breath; this only allows more of the gas to pour in, increasing its effects. The experience invariably leaves an affective imprint on you, as you become severely aware of your embodied dependence on the atmosphere around you precisely at the moment it becomes toxic and acidic.

The images of people’s uprisings that circulate in various media are often characteristically marked by these curious white clouds; they have become the visual hallmark of social struggles the world over. As a weapon, tear gas is distinct from other forms of repression in that it acts on the scale of environmental conditions rather than on specific individuals. Police batons, fists, rubber bullets, water cannons, guns, and pepper spray all intend to inflict violence onto particular bodies in confined spaces, meaning to distribute harm in a more or less directed way. In contrast, tear gas is deployed spatially and atmospherically across generalized territories; it is a weapon that fundamentally transforms the conditions in which the protests themselves take place. The use of tear gas ultimately manifests as an attack on the human condition, a weaponization of the atmosphere upon which we all rely, an offensive against the circumstances that make life possible in the first place.

However, most remarkably, the gas that is meant to drive people out of public spaces, to break up gatherings, and to make it impossible to remain together in the streets, often has the opposite effect. While the trauma of being exposed to tear gas is not to be discounted, people in the momentum of a collective struggle somehow manage to find the courage to stay together, to care for each other, and even to return to the gassed area to face new confrontations with the police. As common as the images of police firing tear gas into crowds are, even more common are the images of people picking up the canisters and throwing them back, of people using antacid solutions to wash off each other’s faces and neutralize the effects of the gas, and of people sprinting into the clouds to help wounded protesters escape. The human condition is crucially not only a dimension of the lived experiences of individual bodies, but in the relational acts of finding one another, caring for one another, and struggling together which are all only possible by virtue of our living together in common.

In Istanbul, networks of professional and amateur health workers rapidly organized impromptu emergency care centers surrounding Taksim Square and Gezi Park, where the majority of the confrontations with the police took place. According to the Turkish Medical Association, which has helped organize many of the clinics, since 31 May 2013 over 11,000 have been affected by the use of tear gas, with a fifth of the injuries involving open sores and fractures. These health clinics, which were meant to aid the injured, were later attacked by police using the same tear gas that prompted the clinics’ necessity in the first place. Police have also resorted to beating medics during the demonstrations, in a direct attack against these spontaneous forms of care. The Turkish state would later go on to declare the organization of the health clinics illegal, and threatened to take away the licenses of any medical professionals who worked with the clinics. The attacks against the medical care of injured protestors represent a further assault against the affective capacity to endure, with the state hoping to increase the degree of precarity so much so that the uprising would eventually collapse in its failure to reproduce itself. 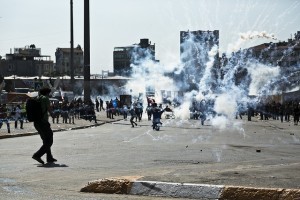 In response to the police’s attempts to make it impossible for people to stay together by mounting an assault against the possibility and conditionality of life itself, protesters responded in kind, by enacting the collective forms of care and resistance that equally make life possible. The global uprisings of the last decade, from the US to Spain to Egypt and now Turkey, all have taken this form of organizing against the conditions of vulnerability and precarity. These were not movements shaped by marches or speeches, but rather centered themselves on the construction of occupations and encampments, producing the contexts in which new relationalities and ways of being-together in the world could unfold. The people’s uprising that is currently taking place across Turkey is expressive of this collective desire, and perhaps need, to be together and care for one another in the shared space of the common that Gezi Park came to be for so many in Turkey. This collective practice amounted to a refusal to simply “care or fight for ourselves,” but rather to fundamentally begin “caring and fighting for each other.”

Importantly, no one comes into, lives in, or leaves this world singularly, and one’s efforts are never wholly one’s own. Rather, the totality of the lived experience of being and acting in the world is the experience of being and acting with others. The people’s uprising that is currently taking place across Turkey, and the global demonstrations and uprisings that have emerged in the context of the financial and climate crises over the last decade more generally, operate within and against the conditions of precarity. The intensification of communal resistance in response to the mass deployment of tear gas suggests a recognition of the precarities and antagonisms that necessarily form the contours of human life and are indispensably shaped by affect. This framing allows us to consider the processes of affect and care alongside the necessary antagonisms and revolts that struggles require of us. A struggle is manifest precisely in this coalitional overcoming of vulnerability, this reaching out through the clouds of tear gas towards one another, which is necessitated by the reality of our precariousness.

When tear gas has been used in an attempt to clear out the various encampments and demonstrations, as has been dramatically taking place across Turkey, it is used in hopes of diminishing this capacity of being-together. The long-term negative health effects of tear gas are well documented, as is its increasingly popular use against demonstrators. While the immediate effects of tear gas typically dissipate after half an hour or less, the chemicals that make up the gas endure in the lungs and bodies of those affected. Those who have been caught in a cloud of the gas for any length of time know that it sticks to not only to the clothes you are wearing (sometimes so much so that washing them repeatedly won’t get rid of the scent), but it also stubbornly attaches itself to your skin and hair and remains long after the initial exposure. The impacts on health are also severe: the known long-term effects of tear gas include its carcinogenic properties, as well as the way the gas damages the respiratory capacity of the affected, sometimes causing breathing difficulties for months or years afterwards.

The vast majority of tear gas is produced by US weapons manufacturers and is then sold to governments around the world in a kind of neoliberal counter-insurgency arms trade. Turkey is no exception, and has purchased over 628 tons of tear gas since 2000, the majority from manufacturers in the United States and Brazil. The history of tear gas dates back to at least 1914, when the gas ethyl bromoacetate was first deployed against German troops by French soldiers during World War I. A little over ten years later, the 1925 Geneva Protocols banned the use of chemical agents in warfare, with the exception of using them in retaliation against other uses of chemical agents; later, the 1972 Geneva Convention banned the research, production, and stockpiling of such weaponry altogether. However, tear gas gradually became acceptable for use as a riot-control agent because legal interpretations have concluded that its use domestically is not considered a war-time measure and thus is not subject to the agreements of the Geneva Conventions. Since then, a variety of chemical compounds have been researched and developed for crowd control use, going under the general names of “CS” or “OC” gas, all of which are mild nerve agents and activate pain receptors in the human body. The domestic security market in the Middle East has boomed in recent years in response to the people’s uprisings across the region, with the defense industry growing to a combined spending of nearly six billion Euros annually. 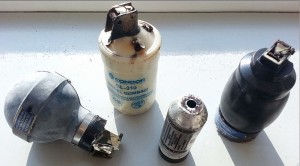 The global research, production, sale, and distribution of tear gas are entangled with the global resistance movements that aim to abolish its use. In response to the increasingly common deployment of tear gas against demonstrators across the world, campaigns such as the Facing Tear Gas project have arisen, collecting testimony from those who have been affected by the gas and lobbying to ban its use. Significantly, one of the five demands that have emerged from the uprisings across Turkey is: “Teargas bombs and other similar materials must be prohibited.” While the outcome of such demands remains unclear, demonstrators themselves continue to invent novel ways to counteract the use of the gas, such as drenching the canisters in sand or wrapping them in wet towels, as has recently been happening in Istanbul after protestors found that simply throwing the canisters back at the police did little to stop exposure to the gas.

The atmospheric coalitions forged in the clouds of tear gas of Taksim Square and Gezi Park call upon mobile and dynamic forms of solidarity in the struggle to produce the conditions for new forms of collectively being-together. Historically, resistance that comes to matter requires that we not only take the necessary risks brought about by the fact of going out into the streets together, and enduring the attacks from the state that typically follow, but in tending to the conditions that allow for the reproduction of the shared struggle itself. This means protecting and caring for those we find ourselves in the streets with, and also protecting and caring for the relationships that allow us to resist and fight back against attacks that threaten our ability to collective endure. Tear gas acts according the logics of conditionality, by attacking the existential bases which allow for collective and shared resistant relationalities to unfold. Our resistances must always respond in kind, by collectively attenuating ourselves to the reproduction of our shared conditions of struggle and care in the face of such existential violence.