On Thursday, Mr. Erdogan, a strong advocate for military intervention in the Syrian war, reacted angrily to the United States’ decision to delay a military strike there — a decision analysts said had left Mr. Erdogan more politically vulnerable at home. 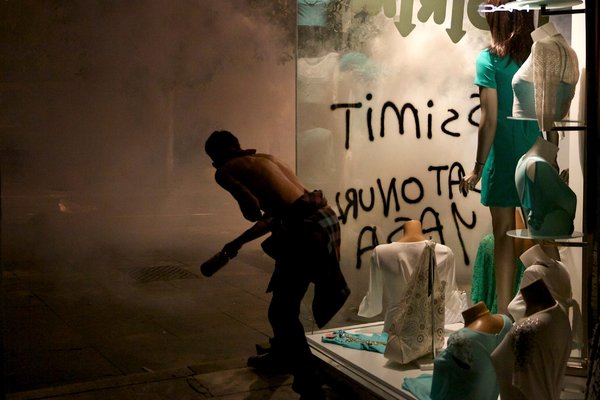 “He’s a real man,” Mr. Bakirci said. “His decisions are always the best.”

But even Mr. Bakirci worried about his government’s policy toward the war in neighboring Syria, which has periodically forced violence across the border, along with more than half a million refugees. “I would prefer if the military didn’t get involved,” Mr. Bakirci said.

On Thursday, Mr. Erdogan, a strong advocate for military intervention in the Syrian war, reacted angrily to the United States’ decision to delay a military strike there — a decision analysts said had left Mr. Erdogan more politically vulnerable at home. In a speech to a trade group, Mr. Erdogan said that the Russian proposal that headed off the planned airstrikes amounted to little more than a stalling tactic and that he did not expect President Bashar al-Assad to ever actually give up his chemical weapons stockpiles.

“The Assad regime has never kept any of its promises until now, but broke them all to buy time for more massacres,” he said.

It was another frustrating setback for Mr. Erdogan, who was one of the first leaders to call for Mr. Assad to leave power. In recent months, he has come under attack at home for violently dispersing protests focused on what critics called his rising authoritarianism. Upheaval in the Middle East has stymied the prime minister’s ambitions for regional leadership, while fraying Turkey’s alliances. And now, he finds himself at sharper odds with a public that largely opposes direct involvement in the war — including a growing number of his own supporters, analysts say.

This week, as Mr. Obama announced he was delaying strikes, the decision seemed to catch Mr. Erdogan by surprise. After volunteering to take part in any military coalition, and advocating a sustained intervention that he hoped would cause the collapse of the Syrian government, diplomatic maneuvering by Russia had left Mr. Assad, for the moment at least, comfortably in power. And it left a central plank of Mr. Erdogan’s foreign policy in disarray.

Cengiz Candar, a Turkish political columnist, said the American decision amounted to an “embarrassment” for Mr. Erdogan, especially given his other recent setbacks.

Mr. Erdogan, who has shied away from any unilateral action against Syria, relied on Mr. Obama to take the lead, leaving the prime minister further exposed to his domestic critics. “The public is very reluctant about military action, and we have a prime minister who wants drastic military action,” Mr. Candar said. “He invested all his assets in the American-led action, and it hasn’t come.”

He predicted Mr. Erdogan’s opponents would step up their criticism of the prime minister’s Syria policy, including allegations that the government is aiding jihadist rebels in Syria, a charge officials have strongly denied.

Kadri Gursel, another political columnist, said that Mr. Erdogan, by “championing” intervention, had been left in a lonely spot by the latest diplomatic turns. “He was very vocal about a process which he doesn’t control,” Mr. Gursel said. “This is upsetting for him.”

The developments in Syria came during a week that delivered Mr. Erdogan plenty of other unsettling news. Turkey lost its bid to host the 2020 Olympics to Tokyo, in what was seen at least partially as a consequence of the government’s response to the protests. And the P.K.K., the Kurdish separatist group, announced that it was halting the withdrawal of its fighters from Turkey, in a sign of the troubled negotiations between the government and the Kurdish group to end three decades of armed conflict.

Also this week, delegates from Turkey’s main opposition traveled to Egypt in a trip that seemed intended to highlight Mr. Erdogan’s troubles and his waning regional influence. His Islamist allies have stumbled in several countries. And Turkey’s relations with Egypt have been all but severed since the Egyptian military ousted former President Mohamed Morsi, one of Mr. Erdogan’s closest regional allies.

Faruk Loguglu, an opposition leader who traveled with the delegation, said the visitors were trying to repair Turkey’s “critical relationships.”

“There is a vacuum in Turkish foreign policy, and this vacuum hurts Turkish interests,” he said.

And after weeks of relative quiet, protests erupted in Istanbul and several other Turkish cities, in a continuation of the unrest that started in May, after the government announced plans to build an Ottoman-style barracks in Gezi Park in Istanbul.

The latest demonstrations were called to protest the death of a 22-year-old protester in the southern city of Antakya, in circumstances that remained unclear. As protesters dodged riot police officers on Tuesday, they cataloged a growing list of complaints with the government, including its policy on Syria.

“You would have thought he learned his lesson at Gezi, but nothing has changed,” said Lal Coskun, a private tutor, who added that deeper involvement in the Syrian war would pose a threat to Turkey’s national security. “Erdogan is once again doing what he wants without considering what the people of Turkey want,” she added.

Turkish officials argue the opposite: that the bloodshed itself poses a direct threat to both international and regional security. And they argue that Turkey — which, under Mr. Erdogan and his influential foreign minister, Ahmet Davutoglu, has promoted a humanitarian foreign policy — cannot afford to turn a blind eye to the killings of more than 100,000 people so far in the war.

Even so, they have had a hard time convincing Turkish citizens. A recent poll by theGerman Marshall Fund found that 72 percent of Turks thought their government should stay out of Syria “completely.”

“This is a very isolationist country. There are not these idealist narratives that play out elsewhere,” said Mustafa Akyol, a writer and political analyst who says he supports Mr. Erdogan’s Syria policy. Most Turks, he conceded, did not.

“It’s not popular, even among his base,” he said. “The care for Syria does not translate into, ‘Let’s go liberate it.’ ”