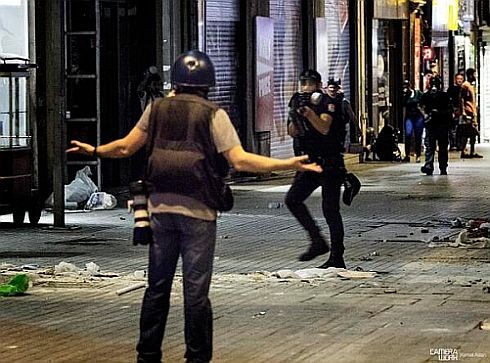 A policeman pointing his gas bomb launcher at journalist Ahmet Şık at close distance on Tuesday in Taksim.

Several journalists were subjected to police violence in Ahmet Atakan protests across Turkey last night. While some were affected by various “demonstration agents” including pepper gas, rubber or paint bullets, other became direct targets of police violence.

Some of the reported injuries were as follows:

* Freelance journalist Ufuk Koşar found himself in clashes between protestors and police where he was battened by the police.

* Columnist Serdar Akınan wrote on Twitter that a policeman assaulted reporter Rabia Çelik by kicking with his head.

Journalist Association of Turkey (TGC) urged the officials to find those who are responsible.

“We are demanding authorities to launch investigations on those who block journalists’ work with shields and rubber bullets in Ankara, Izmir and IStanbul last night. We aree sending them our best speed recovery wishes. We are also urging them to file complaints so that police violence won’t go unpunished. We want them to know that we will do our best support their judicial struggle.”

Press Council (Basın Konsey), on the other hand, underlined that interventions on journalists’ work clearly violated press freedom and they would by no means accept it.

“We are anxiously the continuing police violence on journalists who already work under severe conditions to cover public event in the name of public right to be informed.

“We are urging officials to respect journalists’ right to be inform the public, and create the conditions that would ensure them to work freely.”