Police broke up protestors in Istanbul’s Okmeydani district who gathered to demand justice for B.E. (14), a Gezi Resistance demonstrator in coma for 86 days. While 10 demonstrators and 1 policeman were injured, 5 were detained including 3 children. Among injured protestors included Mete Diş, a cancer patient. 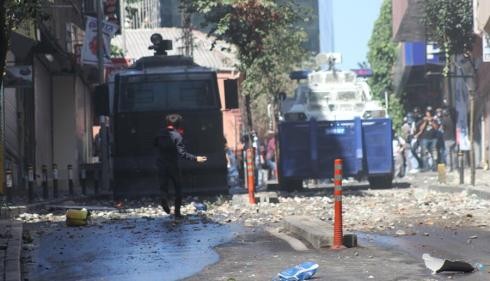 Police broke up protestors in Istanbul’s Okmeydani district who started a “justice march” for B.E. (14), a Gezi Resistance demonstrator in coma for 86 days.

“B.E. was shot here. Now they are shooting other people at the same place,” advocate Evrim Deniz Karatana told bianet.

This morning, police stopped a group who launched a “justice chain” from Okmeydani district to Istanbul Courthouse in Çağlayan district. Protestors were barred from their walk.

Around 10 am local time, police intervened with tear gas bombs and water cannon as the group gathered in front of a medical chamber in Okmeydanı and refused to break up.

Some protestors responded the police intervention with stones. Others put up barricades as the police response came with more intense water spraying.

TOMAs sprayed water inside the apartments of those who supported the demonstration from their windows.

After the police attacks, Karatana said she went to İdil Kültür Merkezi – a culture center immediately besieged by the police.

“They even casted tear gas bombs inside. There are 10 people who have various injuries on their ribs, arms and legs.”

Erkan Munar (35), a protestor suffering from head trauma, was transferred to neurosurgery unit. He was discharged following a CT scan and suturing in the head. It was reported that a police officer was injured in the arm.

Among injured protestors included Mete Diş, an Okmeydani resident and cancer patient who was released from prison on May 24. Diş became target of a rubber bullet as he watched the demonstration from his apartment window. 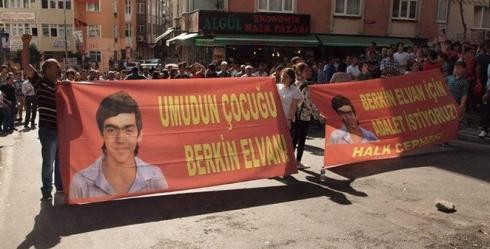 Advocate Aycan Çiçek told bianet that 5 demonstrators were detained. He also said that 3 detainees were children who were transferred to Juvenile Police Department.

On June 16, B.E. (14) was transferred to a hospital after suffering from head trauma due to a gas bomb canister. Diagnosed with brain hemorrhage, B.E. had two brain surgeries. Hospitalized at Okmeydanı Eğitim ve Araştırma Hospital ever since, B.E.’s situation still remains critical, doctors said. (AS/BM)