This year’s protests have less to do with ideology and specific grievances than a new architecture of protest…from-the-networks-to-the-streets flow is one of the most notable patterns of these revolts. These types of protests transcend the traditional format of demonstrations – and build, in the words of Spanish thinker Javier Toret, “a mutant network system with moving boundaries, hybrid, cyborg, a collective body that resists time and can extend through space”. 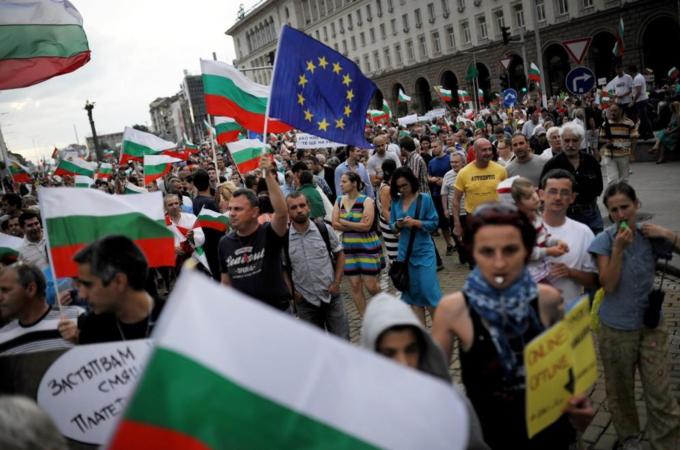 What influence did Istanbul’s Gezi Park protest movement have on the uprising in Brazil? Can we explain the sudden emergence of mass demonstrations in Peru as being inspired by neighbouring Brazil? What do the anti-government, anti-establishment protest movements in these three countries – and in Bulgaria – have in common?

Analysts have searched for specific reasons to explain the recent revolts: Istanbul rose to protect Gezi Park from neoliberal enclosure; Brazilian citizens took to the streets to protest against the rising of the price of public transportation; Peruvians were outraged by corruption and a government that tried to impose its will on the country’s constitutional court. Bulgaria’s protests, which started this January, were spurred by anger at high electricity and water bills.

But does this really explain what has happened in recent months? The reasons listed above would imply that four almost disconnected rebellions took place simultaneously. And cause-and-effect logic cannot fully explain these protests, which fall largely outside the left-right axis.

Rather, what the movements have in common has less to do with ideology and specific grievances, than with a new architecture of protest. In all four countries, established groups such as unions and political parties were almost irrelevant. For instance, the calls for protest in Peru, which filled the capital’s streets in July, were born [Es] in social networks, mailing lists and non-ideological groups. When a reporter suggested to human rights activist Rocio Silvia Santisteba that she was leading the Peruvian protests, she replied: “We convene. We do not lead.”

Violent police crackdowns, news of which was largely ignored by the mainstream media but spread on the internet, transformed the initial demonstrations in Istanbul and Sao Paulo into what John Robb calls “open source protests”, in which no group was able to impose its own agenda. These are protests in which information spread by self-convened, networked citizens breaks the consensus built by the state, media and market.

A study [Es] by Brazilian digital communications firm Interagentes on Brazil’s protests shows that the Passe Livre Movement, which called for lower bus fares, largely lost its leadership of the protest movement following police violence on June 13. The incident opened the demonstration’s range to include many other causes. In massive rallies on June 17, millions of Brazilians took to the streets shouting, as in Bulgaria, against the country’s political parties and wielding a never-before-seen variety of posters demanding a better public health system, better public transport, better education, transparency, and civic rights, among many other causes.

The same thing happened in the early days of the Gezi Park movement in Turkey. After the use of tear gas by the police, the protests evolved into more than just the defence of a park; instead, the movement broadened to become a struggle for civil rights, for a more transparent democracy and for a new economic model.

What do the Bulgarian, Turkish, Brazilian and Peruvian revolts have in common? Another similarity is the fact that they did not aim to destroy the power structure.

“The best subversion is to alter the code instead of destroying it,” wrote French philosopher Roland Barthes in the 1960s. Connected crowds, assembling emotions, do not destroy power. They prefer altering the code of power, the protocols, the process. Doing yoga in front of the Bulgarian congress or in the local occupied political assembly of the Brazilian city of Niteroi can be as subversive as actually taking power. Holding a horizontal, popular and open assembly inside an occupied public building – which has been quite common during the Brazilian uprising – can change how politics work.

When Turkish Prime Minister Erdogan referred to the protesters using the slang word “chapullers”, or looters, the crowd took over the code, proclaiming a “chapulling movement” and creating Chapull.tv, which streamed the events in Gezi Park. And when the Brazilian media called the protesters “vandalos” – rioters – the crowd remixed the insult, proclaiming: “Vandalism is what they do with your father in the doctor’s queue,” referring to the country’s sclerotic medical system.

Alter, remix, hack. Spread the virus. The Peruvian Indignados movement referred to the “repartija” – the government’s opaque distribution of political offices – as the”lagartija”, or lizard, an ironic icon for memorably spreading the message.

For their part, Bulgarians brought watermelons to the door of parliament on day 45 of the protests, an act laden with layers of metaphor. The Bulgarian word for “watermelon” sounds similar to the words for “day” and “year” said together. The Communists ruled Bulgaria for 45 years, and the Bulgarians surrounded the parliament for 45 days. The country, the protesters were saying, was ripe for a change of cycle.

All revolts are connected

What’s more, all revolts are connected somehow. The fact that a Brazilian flag was flying in Istanbul’s Taksim Square, or that the slogan “Brazil will be another Turkey” was used during Brazil’s demonstrations, are examples. The Interagentes study [Es] of digital networks mentioned that when the first protests were called in Sao Paulo on June 6, there were two Turkish Facebook pages among the ten most influential in Brazil on that day: Diren Gezi Parki [Tr] and Turkiyenin Gururu Recep Tayyip Erdogan [Tr].

In the case of the Peruvian protests, the connection was with a more distant revolt: The hashtag used on Twitter to mobilise protesters was #TomaLaCalle, the same phrase used by the Spanish Indignados movement in 2011. From #TomaLaCalle to #VemPraRua (the most popular hashtag of the Brazilian protests), the from-the-networks-to-the-streets flow is one of the most notable patterns of these revolts. These types of protests transcend the traditional format of demonstrations – and build, in the words of Spanish thinker Javier Toret, “a mutant network system with moving boundaries, hybrid, cyborg, a collective body that resists time and can extend through space”.

Maybe the global revolution has just begun. Maybe we can sense its unpredictable flow by observing small details – gestures, posters, icons, photographs, streamings. “I am nobody,” said one of the members of the Passe Livre movement to a journalist. “We are the 99 percent,” shouted the Occupy Wall Street movement. “We are looking for a new horizontal form,” the streets seem to whisper. We desire a distributed democracy. We are a new social grammar. “We are part of a larger struggle, of a global struggle,” a crowd shouted from the roof of the Brazilian congress on June 18.

The Hungarian sociologist Peter Pal, describing what is happening in Brazil, helps us to understand what these networked revolts have in common. Although there may not yet be categories to describe this new type of movement, these uprisings are all “more insurgent, more movement than party, more flow than discipline, more impulse than purpose – with an uncommon power to bring people together”.