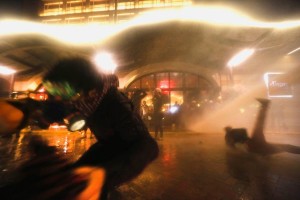 Yannis Behrakis/Reuters
The police attacked protesters with water cannons next to Gezi Park, in Istanbul’s Taksim Square on Saturday evening.

ISTANBUL — After 18 days of antigovernment demonstrations that presented a broad rebuke to the country’s leadership, Prime Minister Recep Tayyip Erdogan ordered the riot police to storm the center of the protest movement in Gezi Park on Saturday evening, setting off a night of chaos in downtown Istanbul.

As protesters fled the tear gas and water cannons, the police pursued them, in one case into a luxury hotel near the park where medics tended to people injured in the raid. Within hours, thousands of people began streaming downtown to protest the crackdown, setting bonfires on the city’s main boulevard as tear gas wafted through streets normally bustling on a Saturday night.

Local officials said at least 44 people had been injured in the mayhem — the worst since the protests began — but their counts are often low. Some people sprawled on the floor of a makeshift clinic in a hotel ballroom complained of burns from chemicals in the jets of water shot from the water cannons.

The crackdown came just a day after it appeared that Mr. Erdogan may have outflanked the protesters, whose complaints against the planned destruction of Gezi Park for an Ottoman- themed shopping mall grew into broader anger and nationwide protests over what critics call Mr. Erdogan’s authoritarian style. The wider protests began after the first police attack in the park, in Taksim Square.

Facing the gravest political crisis in more than 10 years in power, Mr. Erdogan was initially defiant, but late last week attempted to halt the broader movement against him by offering a compromise on the razing of the park that included letting the courts decide what should happen. He won over the protest organizers, but they struggled to bring along the rank-and-file demonstrators, who vowed on Saturday to stay put.

Then, even as the organizers continued to try to work for a peaceful solution, Mr. Erdogan appeared to lose patience, sending in the police.

It is unclear how the latest crackdown will play out in the wider population, given that Mr. Erdogan — who remains popular in many parts of the country — had first offered a compromise. But the brutality of the police assault already set off new demonstrations in Istanbul, and the capital, Ankara, and appeared to harden the resolve of the core protesters.

“We will keep coming back,” said Tulay Bardak, 52, who had fled the park on Saturday night. “We will resist. It’s us against them. No amount of gas can keep us out of the park.”

By 3 a.m. Sunday, the police were chasing protesters in the streets in Istanbul near the contested park, firing tear gas, water cannons and, according to many demonstrators, rubber bullets. Some protesters hurled rocks and bottles, but most were attempting to march peacefully to Taksim Square. To try to stem the flow of new protesters, the city shut down the subway, ferries and some bus routes and the police were blocking main arteries to Taksim. Earlier in the evening, as violence engulfed the city center, Istanbul’s mayor, Huseyin Mutlu, said on television, “The police will go easy on the protesters.”

He criticized the foreign media for “giving false information about Taksim,” and said, “we should be a loving society, not a clashing one.” Several private television stations, meanwhile, appeared to back off their coverage as the protests intensified. Mr. Mutlu later said the crackdown in the park had lasted only a short time and “did not cause any problems.”

One of the protesters who was in the park at the time of the raid, who gave only his first name, Deniz, said, “They fired sound bombs first, and then the tear gas came, and we were caught totally off guard. It was as if they were trying to kill us, not evacuate the park.”

The luxury Divan Hotel, on the edge of Gezi Park, became a refuge for protesters fleeing the violence. Hundreds of protesters, wearing hard hats and gas masks, filled the lobby, where glass cases of cuff links and silk handkerchiefs were smeared with milk that the injured used to clear their eyes of tear gas. As some kept up their anti-Erdogan chants in the lobby, ambulances arrived and medical workers shuttled in with oxygen tanks and other medical supplies.

“Does anyone have any burn cream?” one man yelled.

Another man sat with his shirt off, fanning his burned skin with his socks. “Two days ago he told us to leave, so we were expecting this,” said the man, referring to Mr. Erdogan. “He’s a dictator.”

Selami Yalcinkaya, 42, said, “I have been through the military coup in 1980s, but haven’t seen such a brutality.” Adding that he had voted for Mr. Erdogan’s party, he said, “This is not an issue of trees any more.”

Then, the police outside rushed the lobby, but protesters wedged themselves inside the revolving door and kept them out. A little while later, the police attacked again, and fired tear gas into the hotel, filling the lobby with white smoke and setting off a mad scramble. Many people fled down the stairs into the ballroom. One of the injured dragged in was a journalist, who kept saying, “pigs, pigs, pigs,” in reference to the police.

The street battles almost surely ensured a tense day in the city on Sunday, with Mr. Erdogan planning a rally meant to show the support he says he has from the “silent majority.”

Mr. Erdogan is supported by roughly half of the population, and the other half is a cross-section of secularists, liberals, urban intellectuals and minorities who are divided in their political views but are increasingly united in opposition to what they view as Mr. Erdogan and his Islamic allies’ attempts to unilaterally impose their views on the country. Many critics have been especially upset by his recent campaign to crack down on alcohol consumption and his pursuit of vast urban development projects, which have enriched construction magnates with close ties to the government.

Mr. Erdogan has also antagonized many secular Turks in smaller ways, for example by often telling women that they should have at least three children.

“He goes as far as getting in people’s bedrooms, he decides what we should eat and drink and how many kids we should have,” said a woman in the hotel lobby, whose shoulders were burned from by chemical-laced water.

As the protests in the streets continued, the tent city in Gezi Park was bulldozed. Crumpled tents lay on the ground, amid plates of food that had not been finished when the police arrived.