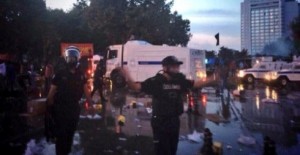 At 8:50 pm local time tonight, police attacked Taksim Square and Gezi Park. “We have a meeting in Istanbul tomorrow. If Taksim Square is not evicted, police forces know how to evict it,” PM PM Recep Tayyip Erdoğan said today, addressing at a meeting in Ankara today.

02.50 Police gassed a crowd on a pedestrian bridge connecting Acıbadem and Çamlıca.

02.35 Two Gendarmerie TOMAs sprayed water at Istanbulites. The first one showed up around Divan Hotel area, while the second one was seen in Harbiye-Osmanbey direction.

01:55: Police fired gas bombs on the front and at the yard of German Hospital in Sıraselviler district. Several patients were affected.

01:22: Several groups are marching towards Taksim Square from Akaretler and Beşiktaş directions.

01:15: Police officers in Halaskargazi and Nişantaşı have reportedly concealed their helmet registry numbers.

00:50: Police resumed storming Nişantaşı entrance and Osmanbey district with gas bombs. Scores of people are trying to reach out to the square despite police interventions.

00:30: Thousands of people assembled in Bakırköy district and started marching towards Taksim Square through E-5 highway. Police resumed its attacks in front of Divan Hotel with tear gas boms. Those who found refuge in the hotel say that their situation is getting worse. A gas cloud took over the hotel lobby. Many people moved up in the hotel to find a spot to breath.

00:22: Police threw gas bombs at Taksim İlkyardım Hospital, a nearby hospital where several injured protestors are currently being treated.

23: 50: Police used water cannons and gas bombs in Uzunçayır Metrobüs stop against protestors who have departed from Kadıköy district to Taksim Square through bosporus bridge.

23:30: An infirmary of Chamber of Mechanical Engineers in Beyoğlu  has been attacked with gas bombs.

23.11: Protestors have set off from Kadıköy to Taksim Square through the bosporus bridge. Ankara residents assembled in Kuğulu Park and launched a support campaign to Gezi Resistance. 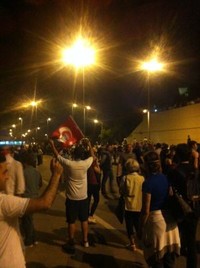 23.00: Tear gas bombs in Mecidiyeköy district around metrobus station. Several people were affected at a pedestrian bridge. Hundreds of people assembled in Şişli and marched towards Taksim Square. All roads in Unkapanı Bridge and Dolmabahçe Palace have been blocked. Istanbul Governor Hüseyin Avni Mutlu announced that 29 people were hospitalized so far.But eyewitnesses said the toll is beyond official numbers.

22.50: Police sprayed water cannons and attacked protestors who refuged in Divan Hotel. 22.33: Dozers are working in Gezi Park – a place close to protestors and media representatives.

22.26: Thousands of people took the streets in Istanbul’s Kadıköy and Gazi districts. Many people are walking towards docks in Kadıköy.

21:50: Protestors are trying to block police intervention by forming a human chain in front of Divan Hotel and struggling to allow ambulance access.  Ambulances are continuously transferring injured people to hospitals. Several children were reportedly among those who were wounded or affected by tear gas. 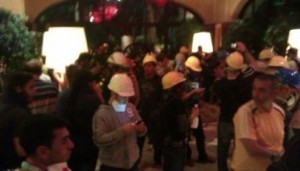 21:25: Gezi Park has almost been evicted. Police is chasing protestors who took the side streets.

21:15: Workers are tearing protestor tents in Gezi Park. Police is dragging and kicking tents. Protestors are responding police with slogans. Police is attacking protestors with sticks.

21:10: Several people were reportedly affected by tear gas. A smoke cloud filled Gezi Park – making it impossible to see a soul in the park. Barricades by the entrance have been removed.