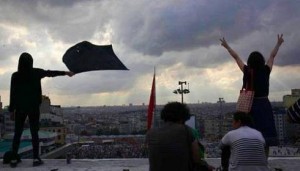 A recent poll conducted by KONDA on 4411 participants on Gezi Resistance revealed that Gezi protestors are averagely 28 years old with 79 percent not affiliated with any political organization and 45 percent attending a protest for the first time.

KONDA Research and Consulting Firm released a poll regarding the Gezi Park Resistance in Turkey.

According to the poll, 49 percent of participants attended protests to condemn the police violence and 69 percent hearing about the protests through social media.

Another striking result of the poll was that 47 percent of participants thought there is no political party in Turkey that they can vote to and 79 percent with no affiliation with any organization.

The poll has been conducted on 4411 participants on June 6 and 7, news website T24 said.

The results of the poll are as follows:

* What are you demanding?
34 percent: Protection of freedoms
18 percent: Prevention of right violations
9 percent: Confronting oppression
9 percent: Urging the government to resign

* Why did you come to Gezi Park?
15 percent: Because the trees were cut
49 percent: To protest police violence

* Are you currently a member of any organization/party/association?
79 percent: No affiliation with any association
94 percent: Participated protests individually

* Are you working or student?

* Father’s education?
39 percent: Has a father with university degree/masters degree