I joined my colleagues, the faculty of the New School for Social Research, in expressing our deep concern over the escalation of repression in Turkey. Here is our letter of protest.

To His Excellency Abdullah Gül 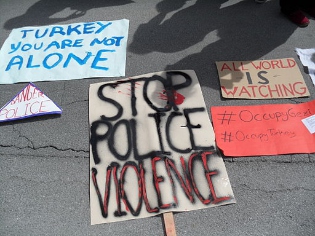 We write to you to express our grave concern regarding the developments in Turkey in connection with the popular protests that began with the protection of trees in Gezi Park in Taksim. As a result of unexpectedly harsh police repression, these protests soon grew to encompass widespread grievances about government intrusion into different forms and values of life and to express the democratic demands of the masses. These demands include greater transparency and popular participation in processes of decision-making about urban restructuring plans and reforms, better accountability of political leaders and bureaucrats, the protection of fundamental rights, and the speedy and effective public prosecution of members of the security forces, whose use of excessive and targeted force on peaceful protestors has scandalized the global public.

As current faculty of the New School for Social Research, which was founded as a home for scholars who became refugees of Nazi rule in Europe and who were known to the world as the “University in Exile,” we are proud to maintain a sincere and ongoing commitment to fostering democracy around the world, the freedom of speech and protest, and the free exchange of ideas. We see this commitment as the constituent element of our history and identity as a research institution that cultivates the highest standards of scholarship as well as the ethos of public engagement and active citizenship.

In this light, we are deeply concerned about the news from Turkey regarding the violent suppression of protestors, the arbitrary detention of individuals on grounds such as participation in peaceful demonstrations, use of social media, provision of volunteer medical care to the wounded protestors, or exercise of legal representation or counsel, and the preemptive labeling of peaceful protestors as “terrorists” by members of the government. We consider the wave of arbitrary detentions, some of which remain incommunicado, as a serious violation of the constitutional right of citizens in a democratic country to express their grievances and opinions in a peaceful way. The real test of a democracy is not only how it builds consensus among a plurality of values, different opinions, and interests, but also, and more importantly, how it treats dissent.

As faculty of the New School, we condemn police brutality and ask that those responsible for giving the orders as well as those executing the orders for the use of excessive force be immediately brought to justice. We denounce in the strongest possible terms the making of threats and intimidations toward individuals who exercise or plan to exercise their right of civil disobedience and toward those who shelter protestors from pressured water, tear gas, and rubber bullets. We ask for an immediate end to the detention of individuals who have done nothing other than participate in peaceful demonstrations. We call upon the government to cease its polarizing and demonizing rhetoric and its resort to measures reminiscent of a “state of emergency” in which citizens are treated like enemies. We encourage the adoption of a conciliatory public discourse as well as the active promotion of measures that enhance democracy, both through the decrease of the 10 per cent national electoral threshold and the creation of new, local channels for direct participation.

We express our deepest condolences for the four citizens of Turkey who have lost their lives in the recent events and our sympathies for those who have lost their eyes, suffer broken limbs, and endure other serious injuries. We are saddened by the thousands of people who have reported human rights abuses and physical injuries, and we are worried about those who face legal persecution on the seriously dubitable charges of terrorism and organized crime. We trust that Turkey will emerge a better and more democratic country from this experience but see that such an outcome will be possible only if the current situation is considered to be an opportunity to affirm fundamental rights and liberties, the legitimacy of peaceful disagreement and organized dissent, and the illegitimacy of the deployment of arbitrary violence, detention, and intimidation tactics by the state upon its own people. We appeal to your office to support our call.

Faculty of the New School for Social Research