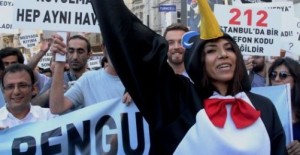 The Turkish media’s lack of coverage of the Gezi Park protests has thrown an unprecedented light on the country’s long-suffering Fourth Estate. Ask any Turkish journalist and they’ll tell you that self-censorship and a lack of media independence are issues that have plagued the industry for decades, with the recent conclusion of the Ergenekon trial serving as a timely reminder of just how much influence the military and deep-state agitators used to exert over the Turkish media (regardless of how deeply flawed the trial process itself was). Nevertheless, there is a growing sense that, in the wake of the Gezi Park protests, things are looking as bleak as ever for the Turkish press, under siege from both direct and indirect governmental pressure.

The Turkish Journalists Union’s (TGS) recent announcement that 22 journalists defiant to the prevalent culture in the Turkish media have been fired and 37 forced to quit over attempted coverage of the Gezi Park protests is a shocking demonstration of the price media workers in Turkey face for not following the unspoken rules of self-censorship. The mainstream media in Turkey is overwhelmingly in the hands of a small club of holding companies and conglomerates with a vested interest in providing the government with positive coverage in order to secure favorable treatment in other areas of their expansive business portfolios (if not to avoid outright sanctions on their businesses for failing to fall into line).

Two of the most prominent journalists to have fallen victim to this ‘solidarity of capitalists’ (as one writer terms it) are Yavuz Baydar, formerly an independent ombudsman for Turkish daily Sabah, and Can Dündar, formerly a columnist for Turkish daily Milliyet and a prominent writer and poet in his own right. Their highly publicized dismissals were an overt demonstration of the growing intolerance towards dissenting and anti-government voices within the media fiefdoms of Turkish tycoons, increasingly concerned with currying government favor. According to Dϋndar, it was Erdoğan Demirören himself, founder of the mammoth Demirören Group, who pulled the plug on Can Dündar’s Milliyet career with a phone call.

Journalists who escape dismissal despite their critical stance towards the government (often as a consequence of working outside the tightly controlled mainstream media) may face direct pressure in the form of costly defamation trials. Turkish Prime Minister Recep Tayyip Erdoğan has built a reputation for himself as a prodigious litigator, and is well known for making use of Turkey’s broadly worded defamation laws to pursue his critics through the courts. Undeterred by having made European Court of Human Rights history in a landmark defamation case involving Turkish journalist Erbil Tuşalp, Erdoğan has been racking up lawsuits recently, with novelist and journalist Ahmet Altan, journalist Bekir Coşkun, writer and Islamic thinker Ihsan Eliaçık and novelist and columnist Perihan Mağden and seven high school students among those to have faced legal action from Erdoğan’s lawyers within the past 12 months.

Meanwhile, Erdoğan is considering exporting his litigiousness abroad. In late July, he threatened to sue The Times over a harshly worded open letter that was taken out as an advert by the Atatürkist Thought Association and signed by 30 prominent intellectuals. The letter drew parallels between a rally held by Erdoğan’s supporters and the Nuremberg Rally, dubbed Erdoğan’s rule as ‘dictatorial’ and described the demonstrators in Gezi Park as ‘youngsters wanting Turkey to remain a Secular Republic as designed by its founder Kemal Atatürk’.

Erdoğan accused the paper of ‘renting its pages out for money’, suggesting that the price of The Times’ integrity was equivalent to the money paid to feature the open letter. This statement could hardly be more ironic in light of the cynical media blackout that prevailed during the early days of the Gezi Park protests, when some of Turkey’s mainstream media bosses openly traded journalistic integrity for the promise of government favor.

Erdoğan’s apparent ignorance of this irony speaks volumes about his perception of the role of the media. Smear campaigns conducted by his supporters against journalists critical of the protests – most prominently involving Selin Girit of the BBC and Christiane Amanpour of CNN – are indicative of a growing antipathy towards dissenting media voices amongst Erdoğan’s conservative base, reflecting the prime minister’s own coarse rhetoric this summer. Worryingly, both journalists were accused of being part of a foreign conspiracy, a frequent charge during the dark, unstable days preceding Erdoğan’s rule. A return for the Turkish people to such a paranoid, insular mindset bodes ill at such a critical time, when Turkey is at a crossroads in its march towards democratization and reconciliation with its Kurdish population.

The number of Kurdistan Communities Union (KCK) trials is perhaps the most significant benchmark for Turkish progress. The KCK investigation – initially aimed at bringing down the ‘urban wing’ of the outlawed Kurdistan Workers’ Party (PKK), which has been engaged in armed conflict with the Turkish Army since 1984 – has devolved into a highly politicized witch-hunt of pro-Kurdish politicians, intellectuals, lawyers and journalists. Forty-six journalists are currently on trial in just one of the many branches of the investigation (reportedly the largest single press trial in Europe), mostly working for Kurdish and pro-Kurdish press. The imprecise wording of Turkey’s draconian Anti-Terror Law allows for the implication of those with no links to terrorism or the plotting of violent acts in such investigations. The academic  Büşra Ersanlı faces the same heavy sentence as senior, armed militants, an indication of the absurd outcomes facilitated by the Turkish justice system.

The government’s intransigence towards media freedom in Turkey can be seen in many other walks of life in the country. There can be no doubt that this contributed to the groundswell of dissatisfaction that led to the Gezi Park movement this summer. As Turkey becomes increasingly polarized, one cannot help but worry about the future of those who chide rather than cheer the government in the Turkish media.

* Alev Yaman is a human rights advocate, who has worked for various London-based organizations specializing in freedom of expression, migration studies and the rule of law. She is currently working as a Turkey  researcher for English PEN and PEN International.