Two plain-clothes officers posing as well-wishers attempted to enter the Taksim Ilkyardim Hospital Intensive Care Unit where 16-year-old Mustafa Ali Tombul was being treated after a tear gas canister broke his skull. Tombul, a high school student, had brain surgery after being injured during demonstrations in the Tarlabaşı neighborhood of Istanbul. 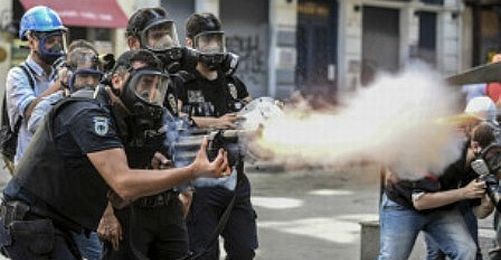 New details relating to the police assault on Mustafa Ali Tombul have also become available. Tarlabaşı resident Dinçer Erdal, who witnessed Tombul’s grave injury, underlined that a shopkeeper prevented Tombul from escaping the attack. Özgür Karagöz, Tombul’s friend who brought him to the hospital, stated that after Tombul’s surgery the two plain-clothes officers introduced themselves first as Tombul’s friends, then, when it became clear this was not true, as his relatives. Erdal and Karagöz related the events to ANF.

Mustafa Ali Tombul, born in 1997, became interested in the Gezi Park protests after coming to Istanbul from Izmir for summer vacation. He went to Taksim after hearing that the park would be reopened, and this police assault changed his life in a moment. He found himself in Tarlabaşı while trying to escape from tear gas and rubber bullets fired by anti-riot forces. He and his friends attempted to take refuge on Keresteci Recep Street, but could not avoid becoming the target of the police. Tarlabaşı resident Dinçer Erdal recounted witnessing the attack: “It was around 11pm. The neighborhood echoed with the sound of tear gas canisters being fired. Suddenly three young people ran past me. It was clear they were trying to escape the attack. One of them was stopped by a blonde woman who works at one of the local hotels. She help tightly to the young man’s arm and prevented him from escaping.

HE DIDN’T HAVE A PULSE, HIS PUPILS WERE ENLARGED

“Before I could even wonder what was going on, anti-riot forces entered the street. They were firing indiscriminately. They took aim at the youth and fired tear gas from about 5 meters away. With the sound of the canister erupting he slumped to the ground. Then the police withdrew without even a look back. Right away I went and pulled him to the middle of the street. He was unconscious and bleeding heavily from the back of his head. I called over a nurse whom I knew from the neighborhood.  She did the first medical intervention. She told me that the young man, whose name I would learn later, did not have a pulse and had enlarged pupils. I had not witnessed such an inhuman and hostile attack in my life.”

Özgür Karagöz, Tombul’s friend, was among the ones who tried to seek refuge on side streets. Karagöz said that he lost sight of his friend during the attack and that he was scared when he saw Tombul surrounded by people. He said that they took Tombul to the hospital in a cab. He also said that the police did not stop following them. Karagöz continued, “When we arrived to the hospital Ali was immediately taken into surgery. He was in critical condition. The bone was exposed at the back of his head. He was taken into the intensive care unit after a successful surgery. Then two people in civilian clothes came to the hospital.

INJURING HIM WAS NOT ENOUGH, THEY CAME TO PULL THE PLUG ON HIM

These two people told hospital officers that they wanted to visit Ali. We immediately interfered and asked them who they were. They said they were friends of his and, when we replied that we were his friends as well, they changed their story and said they were relatives. At that moment, we began to suspect these two. Later we learned that one of them was the police officer stationed at the hospital and the other was a plain-clothes police officer.

Karagöz stated that the lawyers belonging to the İstanbul Bar Association urged for the preparation of an official report concerning these two officers. Karagöz expressed his reaction, “It was obvious that they came to the hospital once they learned that the surgery was successful. It was not enough that they injured him, they come to unplug him from the life support unit.” Karagöz said that Mustafa Ali Tombul’s family would come from İzmir.