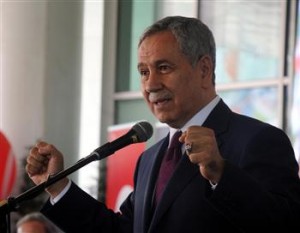 Turkey’s Deputy Prime Minister Bülent Arınç asked a local singer not to sing the folk song “Vardar Ovası” because the song contained the word “rakı” in the lyrics in a meeting with the Bursa-based Balkan Immigrant’s Culture and Support Association, or Bal-Göç, on Aug. 9.

When some people in the room asked Güney to sing the famous Balkan song “Vardar Ovası” (Vardar Valley), Arınç said jokingly that “this song’s lyrics include rakı [a local alcoholic beverage]. Sing a different song.” “Sing it when I am not here,” he added. Güney skipped the song and sang a different one upon Arınç’s demand.

However, Arınç posted a tweet in 2011 saying that he was listening to the song with pleasure.

“Atatürk’s favorite songs are playing. My wife and I are listening that magnificent song ‘Vardar Ovası’ with great pleasure,” he wrote.