Eylem Karadağ is among the female resisters. Detained during Dikmen resistance on 26 June 2013, Eylem was abused by the police and threatened with rape. She talked to Sendika.org about her experience. And she has a message for everybody: ‘We shouldn’t keep quiet, they should be scared of our courage. We should speak up so that AKP can’t continue its misogyny, we should speak up so that women can walk in the streets freely.’ 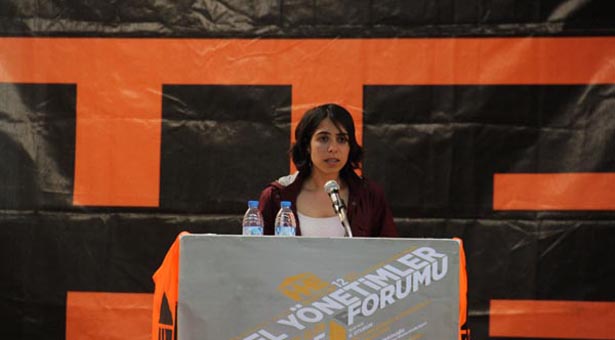 From the first moment, women were in the frontlines of the public resistance starting in Gezi Park. They took part in city barricades, park communes, resistance movements in local quarters, protests with pots and pans. They have been among the most militant and resistant citizens of this resistance against AKP fascism and against its police, TOMAs (water cannon vehicles) and guns. Women had a vital reason to build this resistance: the misogyny of the AKP. AKP fascism targeted women while attacking the resistance movement, as well.

News coming from all around the country indicates that female resisters were exposed to systematic abuse by the police, and sexual abuse was used as a specific method. Women oppose this denigration of women, and they are calling on others to join this resistance. As Eylem said, ‘The AKP government should be scared of women because women’s anger will destroy the AKP’.

Eylem, could you please introduce yourself?

I’m 25. I’m doing my master’s degree at Mersin University, and at the same time I’m a physical education teacher who hasn’t been appointed yet. I am a member of Ankara İlker Halkevi. I became acquainted with Halkevi in 2010. My family lives in Mersin. Once while I was in Mersin, I went to Mersin Halkevi with my uncle. The cosy, intimate atmosphere I found there gave me peace, and the next day I was among the people supporting Halkevleri while protesting against the increase in electricity prices. Because they were struggling for our rights including education, transportation, healthcare, accommodation, in short, everything concerning our lives now I, too, am an active participant within the activities of Halkevleri.

In spite of the intensive attacks by the police in Dikmen, Ankara, we used to start marching at 9 pm every night. The old, the young, children, shopkeepers, students, people in Dikmen, we all used to gather and march from the beginning of the Gezi Resistance on 31 May 2013. Then in between the slogans, we started to talk and get to know each other, and that was one of the best parts of this resistance. It brought everybody together and developed a good model of solidarity.

We started to march in Dikmen on Wednesday, 26 June 2013 again. We continued our protest for 2 hours without any attacks. At 11.00 pm, we saw water cannon vehicles and scorpion vehicles patrolling on the main road, and the attack started shortly after than this. The attack continued fiercely till 1.00 am. Then I started to look for the son of our female friend from Halkevi. He was 17 years old and I wanted to keep an eye on him. At that moment, scorpion vehicles and the riot squad behind them came into the alley where we were. Immediately, I entered the garden of a coffee house, and saw D. there. We waited there for a while because the riot squad had entered the street to attack. There were a few people in the coffee house. I went towards the door and asked them to let us inside; however, they locked the door, they didn’t let us in and they even made fun of us. So we continued to wait.Then we heard the footsteps of the riot squad, they pointed a light into the garden and saw us. One of them, most probably their chief, said, ‘Take them both, do you think you can hide from us?’ They hit D. in the head and back although he did not resist them at all. They were also hitting me in the head. One of us was young and the other was female, and they were contemptuous towards us. They took us to the vehicle called a scorpion. We walked not more than 5 meters. They threw D. inside the scorpion by hitting him in his back over and over again.

They started to abuse.

In the meantime, one of them was squeezing my boobs and the other was stroking my hip. This continued for a while and they threw me inside the scorpion. At that very moment, I felt a hand on my genitals. After throwing us inside, they kept on hitting us in the head systematically. The chief, as we understood from others’ calling him ‘chief’, said, ‘F.ck them all, smash them!’, and then their actions continued more fiercely. Hence, one of them sat on my lap and started to stroke first my breasts and then my neck with one of his hands. He did the same with his elbow, as well. This continued until we arrived at the Provincial Directorate of Security. They were threatening to rape me. I couldn’t say a word because there was a young boy near me and I didn’t know how this would affect him. He, also, was being beaten at the same time and I didn’t want him to get scared.

When we arrived at the Provincial Directorate of Security, they insulted me by saying, ‘You shameful woman. It’s better not to leave women like you without a man.’ I refused their offer to drink water or smoke. They found a spraycan in my bag and held it over me; they threatened me by saying, ‘What did you write with this? Talk! Otherwise, we will make a note about it in the official report.’ And I said, ‘I do not consider you as my addressee, if I had had the opportunity, I would have written something with this spray, but I couldn’t because of your attack.’ Thereupon, they started saying, ‘These are traitors!’, etc. Then we were put under surveillance, our testimonies were taken. Afterwards, we were taken to Forensic Medicine Institute and finally we were released.

Women sometimes have difficulty in talking about abuse due to reasons such as social pressure, embarrassment, fear, hesitation. We know that lots of women were exposed to sexual abuse during the resistance. What do you want to say about this?

I’m talking about my experience because I don’t feel uncomfortable about it. I believe they thought I was weak, incapable because my hands were handcuffed behind my back and I was a ‘woman’ half of their size. In fact, the ones that abused and threatened me with rape when I was in such a situation are weak and incapable. Furthermore, I am in favor of informing everybody about this violence. I am sure that lots of women experienced this like me. However, they may not talk about it due to social pressure.

in the streets freely.’ We were in the frontlines of the barricades throughout this resistance with our identity as females, as we always were in other resistances. From now on, we will continue to be on the streets, within the resistance with our growing anger against AKP’s policies of misogyny. AKP government should be scared of women because ‘women’s anger will destroy AKP.’

As you told us, women were always in the frontlines of this resistance. Why did you take part in this resistance? What do you want to say about the resistance as a woman?

Gezi protests have been a resistance, a public resistance starting in İstanbul, spreading to Ankara and all the cities of Turkey. The ones who want to protect parks, cities, squares, namely, all areas of life against the AKP’s damage to nature found themselves in squares resisting against AKP’s pressure, torture, and hostility towards labour.

This resistance has been so comprehensive that it led women into the streets with their pots and pans – women who were abused for years, whose identity as a woman was ignored, who were exposed to violence, abuse, rape but couldn’t say squat due to the male-dominant system and its hegemony. This resistance introduced children to the gas bombs and batons of the police, who were shown as a threat to frighten children by their families from their infancy. Moreover, it caused them to overcome this fear of police.

It had the retired saying, ‘Enough!’ and led them to streets. They are oppressed within the system since they cannot get by on their pension. Also there has been the anger of Alevi citizens who have always been oppressed by governments for years due to their Alevi identities.

LGBT individuals, ignored by the male-dominant state and society, were on the streets to end this homophobic hatred from now on; young people who were unaware of another world other than their own quarters but still have a rebellious nature were all on the streets; in other words, everybody, all of us were on the streets, shoulder to shoulder to say ‘Enough!’ to pressure, violence, torture and oppression.

All these were reason enough for me to shout out in the squares, to take part in the resistance; however, there was another anger that led me to the streets as a woman. The prime minister targeted women in all his speeches. At first, with his statements about abortion, he thought that he had a right to talk about our bodies; however, we showed that we wouldn’t let anyone comment on our bodies by saying ‘It’s our decision, it’s our life!’ on the streets. He wanted to introduce the 4+4+4 education system because he was planning to make women ‘a good mother of a good family’, he was opening the way to the marriage of girls at an early age, but as women struggling against these evil policies of AKP for years, we were on the streets again because we were defending our rights to education, and we were defending our rights ourselves, not anybody else. As you can see, I took part in the Gezi resistance against the AKP’s misogyny as well.