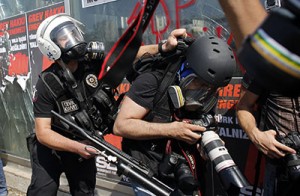 A police officer clashes with a photographer in Taksim Square. (Reuters/Murad Sezer)

It all changed so swiftly. The demand and price of gas masks, protective eyewear, and helmets rocketed in Istanbul. Not only protestors, but journalists, too, contributed to the rush. Hardware store clerks were quick studies, explaining to journalists which masks offer you a better line of sight when taking pictures, and describing the problem of speaking through a mask when broadcasting live. Of course, the gear only works when it is worn, not after police confiscate the equipment.

Turkey is making world news over violent clashes between police and tens of thousands of protesters. Journalists reporting the news have been targeted in the street by variety of actors, including law enforcement and protesters, and have been assailed in columns and commentary by fellow journalists. Turkey has long been a dangerous place for some journalists, especially reporters covering the Kurdish insurgency in any way that challenges the views of the state. But covering the news in Turkey is now more dangerous than it has been in two decades.

CPJ has documented dozens of anti-press attacks during the unrest, including detentions, assaults, raids, obstruction, threats, and equipment confiscation and destruction. CPJ research shows police have posed the biggest threat, beating numerous journalists, and arbitrarily detaining many more.  But angry protesters have also attacked journalists whose reporting they perceive as being supportive of the state. Two news vans were destroyed at Taksim Square near Gezi Park when the protests began, and several more journalists were accosted by protesters over the following weeks. However, on at least two occasions that I witnessed, protestors stepped to defend the journalists from the attackers.

The state violence does not appear to be systematic. Not every police officer attacks every journalist on sight. However, as numerous and repetitive attacks documented by CPJ, Reporters Without Borders, the Turkish Journalists Union and media outlets show, the police also seem to have no fear of being held accountable for acting violently or arbitrarily. The journalists union filed a broad criminal complaint on Monday concerning the assaults, threats and detentions, but many journalists interviewed by the CPJ after the attacks hold little hope that law enforcement officers will be held accountable.

The Turkish press has long suffered from a lack of solidarity, which is impeding the ability of the press to respond to attacks on journalists now. While the authorities, including ministers, mayors and governors, are actively using social media to defend their actions, they are deaf to questions of brutality against journalists covering the protests. The reporters who face them in press conferences are not assertive in questioning the assaults on the press, as many are more used to following the government line than challenging it.

In the midst of this climate, there are a number of pragmatic points a journalist can keep in mind. Don’t run alongside the protesters when they are being gassed or charged by police–that’s one lesson I learned the hard way in the early days of the clashes. Dressing and acting in a way that does not identify you as a protester can help, although a police officer may still attack you for simply wearing a gas mask. Keep your camera and ID card (if you have it) at hand.

Traveling with colleagues is recommended: The police seem more careful when there are more cameras around. As a freelance journalist without any official credentials, I managed to stay healthy by hanging around camera crews, preferably international ones. But even using the buddy system is hardly a guarantee. Journalists traveling in pairs have also been targeted in recent weeks.

Having an official yellow press card (which is not granted by a profession union but the state, by the way) alongside the ID cards of the media outlet you work for can also help, but not necessarily every time. If you meet a cop who is already on the edge or over it, lacking rest after excessive overtime, all the press credentials in the world may not be enough to protect you. (The CPJ Journalist Security Guide includes a chapter on covering civil disturbances.)

One unidentified journalist uploaded a video of an enraged police officer berating her for recording police and not the protestors. The intensity of the officer’s emotions shows the situation is a new one to almost everyone involved, and tensions remain high.

Many journalists including domestic and international reporters face more than just physical threats. Some politicians have labeled journalists as in league with the protester, or even as terrorist sympathizers. The semi-official state news agency has published photographs of some field reporters with a similarly defamatory text. The mayor of the Turkish capital of Ankara has joined in the name-calling. Sadly even other journalists have joined in, too.

The absence of solidarity among Turkey’s long politically and to some degree ethnically polarized press has been clear. Anti- and pro-government journalists are not hesitant to call each other “traitors” and worse. Defamation of colleagues on traditional and social media is common.

Seemingly surrounded and under siege from all sides, reporting from the streets of Turkey now requires preparation, care, wits, reflexes, and little luck.