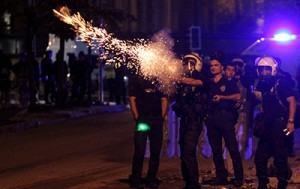 Istanbul, June 20, 2013–Two journalists were detained and one newsroom raided this week as Turkish authorities continued a broad crackdown on dissent, according to news reports. The Committee to Protect Journalists calls on the government to halt its obstruction of journalists seeking to cover the protests that have swept the nation.

“Turkish authorities are at a crossroads. They can follow a path of growing authoritarianism or they can choose instead to tolerate public dissent and critical press coverage,” CPJ Europe and Central Asia Program Coordinator Nina Ognianova said from New York. “It is not too late for the government of Prime Minister Recep Tayyip Erdoğan to do the right thing.”

Anti-terror squads detained dozens of Turkish citizens in Istanbul and Ankara early this week as part of an investigation into who organized the mass demonstrations that have swept the country, according to news reports. Police detained 193 people in Istanbul, including two journalists with pro-opposition outlets that have been sympathetic to the protests.

Sedat Şenoğlu, an editor of the socialist weekly Atılım, and Selvi Coşar, reporter for the leftist Özgür Radyo station, were detained on Tuesday. Şenoğlu was released today, but Coşar remains in custody. Neither has been charged with a crime. Turkey’s anti-terror laws allow for prolonged detention without charge, CPJ research shows.

In a separate episode, Istanbul police raided the offices of the leftist Etkin News Agency (ETHA) early Tuesday as part of an ongoing investigation into the activities of the Marxist Leninist Communist Party, or MLKP, which is banned in Turkey, according to news reports. Police confiscated the outlet’s archives, hard drives, notes, and other documents, according to ETHA Editor Arzu Demir. The editor told CPJ that police strip-searched the journalists and verbally attacked them. She said the journalists were not allowed to call their lawyers.

Demir said the staff was not told of any details of the investigation. She told CPJ that ETHA had often reported on banned organizations in Turkey, but that she suspected the raid was in retaliation for the outlet’s coverage of the clashes between police and protesters in Gezi Park, the part of Taksim Square that was the starting point of the demonstrations that began last month. She said four ETHA journalists had been injured by plastic bullets and gas pellets.

Muammer Güler, Turkey’s interior minister, told journalists on Tuesday that authorities were investigating reports that members of banned organizations, including the MLKP and the Socialist Party of the Oppressed, had clashed with police in the protests and damaged public property. The statements confirmed the predictions of some international news analysts that the government may use the protests at Gezi Park to launch a crackdown on dissent.