ÇGD, TGC, TGC (Journalist Unions and Associations) protested the police as they were detained, exposed to violence and prevented from doing their jobs. 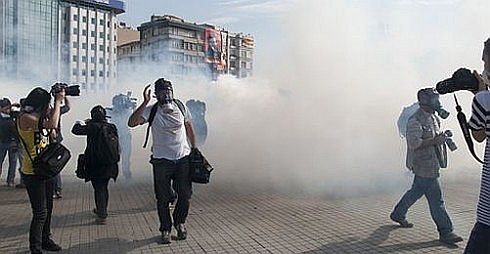 The protest of Journalism Associations took place as a reaction against the statements of the government targeting journalists, prevention of making news related to Gezi Parkı protest and the violent attacks of the police.

ÇGD: Police should take their hands off journalists

“In various parts of our country, journalists recording the news especially in and around Kızılay-Ankara and Taksim-Istanbul have been exposed to the violence of security forces, some of them were detained and some faced harsh behaviours.

“The police have specifically chosen some journalists who are following the news to take into custody. The video recordings clearly show the IMC TV’s Editor Gokhan Bicici beaten by 5 police officers, being dragged along the street and handcuffed to be detained. An investigation should immediately start against these police officers immediately and they should be removed from duty.”

“It is reported that the police arrested some journalist friends in the Beyoğlu district of Istanbul because they didn’t have ‘Yellow Press Cards.’ This is unacceptable.

“One does not become journalist with a yellow press card. The journalists are intimidated so that they won’t inform the public about the police brutality. The real target of the attacks on the journalists, especially those who work in the institutions that are opposing to the government, is the right for communication in particular and the universal human rights in general.

“The journalists working in the media corporations and especially those who are on duty in the field carry either Yellow Press Cards or the identification cards of the institution that they work for. The police do not have the right to interrogate or to discriminate the kinds of press cards that the journalists have or do not have.

TGS: Journalists should resist against their bosses who impose censure

“Journalist Union of Turkey, the representative of the press workers who are parts of proletarian classes, condemns the police brutality against protesters siting inside the tents in Gezi Park with their families and children. The Prime Minister who ordered this crime of humanity will be accountable for before History. We denounce the PM to all the international community and to humanity.

“We invite media corporations that censure the realities or cover up the government’s fascistic politics by broadcasting biased and deceiving news not to be accessories for this crime of humanity any more.

“If the media corporations that were turned into means of propaganda at the hands of the government had supported the ‘struggle for the freedom of press” initiated by the organizations of the profession and become mediators for the people to express themselves maybe we wouldn’t have had these social explosions. We invite these media corporations to effectuate qualitative and responsible publication and broadcast compatible with the professional ethics.

“To our colleagues who paid for the struggle for the freedom of press: our responsibility to our people who have just demolished the empire of fear created by totalitarian politics requires us not to remain indifferent to the truth and to shout out even louder our discontentment.

TGC: Prime Minister should give up targeting journalists

“The process of punishing the freedom of press and of expression continues during the incidents started with the Taksim Gezi Park and spread to all over Turkey. The government and its forces impede the works of journalists who make news about disproportionate violence deployed against the protestors. As of today, 24 journalists were injured and 8 were arrested during the intervention by the forces of security against the protestors. It was prohibited for the journalists to enter the Taksim Gezi Park during the police’s intervention. The gas masks that our colleagues were using on duty were confiscated. That the Prime Minister Recep Tayyip Erdoğan threatens in his public speeches both Turkish and international journalists put them in a vulnerable position without any safety of life.

“The Prime Minister should stop targeting journalists in his speeches. The governors and chiefs of police departments in each city are responsible for safety of lives of the citizens as well as the journalists that inform people about realities. We invite the governors and chiefs of police to stop arresting journalists, to abide by the fundamental human rights and freedoms and to provide safety of life of the citizens and journalists. And we demand that our arrested colleagues should be released immediately.”

According to the TGC’s data;

*Erhan Karadağ, Ankara representative of the Kanal D TV channel was arrested.
*Fatoş Kalaçay, Ankara correspondent of the Sol newspaper, was beaten and arrested.
*Serkan Bayraktar, the cameraman of the Ulusal Kanal TV and Mustafa Kaya, Ankara representative of the same TV channel, were arrested while they were broadcasting the protests on live.
*The police arrested four journalists, including DHA reported Uğur Can, on duty in Istiklal Boulevard. Can was released after a while. Among those four journalists were Serhat Uludağlar, the reporter of the Akşam newspaper and IMC TV’s Editor Gökhan Biçici. (EA)