The Queen Victoria Building and the Circular Quay has seen citiziens of Sydney  demonstrating against the Turkish government and the police brutality againts the protests at the Gezi Park, on June 1st, 2013. Protesters supported the resisting people of Turkey with slogans such as “Everywhere Taksim, everywhere resistance!” and “Tayyip will come to our terms!”. Protests in Sydney spread to the front of the General Consulate of Turkey on June 2nd. People expressed their desire to see the prime minister Erdogan “step down”. 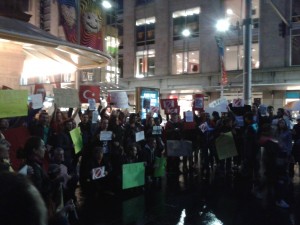