From Lufthansa to the CIA, Turkey’s government has come up with some worrying conspiracy theories to explain Gezi Park 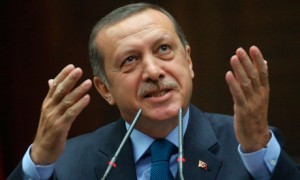 It has to be said that when the Turkish government began to flail around for the “real reasons” behind the Gezi protests, their initial conspiracy theories lacked imagination – the CIA, Europeans jealous of their economic success, unspecified foreign forces in cahoots with terrorists, Twitter, the “interest rate lobby”, and, of course, the international Jewish conspiracy. What would a search for a scapegoat be in Turkey (or indeed Greece) without our old friends the Elders of Zion?

Since it was obviously inconceivable that the Turkish people themselves – knowing they were living through a golden age of good governance, piety and profit – would ever take to the streets, there must have been a plot.

Well now we have the answer – it was all a giant telekinetic attack by dark forces to discredit Prime Minister Recep Tayyip Erdoğan, because he had made Turkey a “model for the world”. Quite rightly, the man who made this astonishing discovery, Yiğit Bulut, has just been made Erdoğan’s chief adviser. No, this is not a joke. Telekinesis, you may have noticed, is a Greek word.

Ministers, and the majority of Turkey’s media, have been outdoing each other for the last month with outrageous theories and often outright lies to mask Erdoğan’s staggering mishandling of a minor planning dispute over an Istanbul park that brought millions on to the streets in protest at his authoritarian style and police violence against demonstrators.

His ruling AK party has variously claimed that the Gezi protests were the work of CNN or the BBC and even Reuters (after one of the agency’s reporters asked Erdoğan an “unapproved question”). In one faked newspaper interview, CNN’s Christiane Amanpour “confessed” to starting the protests “for money”. Fingers were also pointed at leading liberal journalists, some of whom have since been sacked by media owners afraid of incurring further government wrath (Turkey is already the world’s No 1 jailer of journalists).

More shocking even than the smearing of those killed by police is that Erdoğan’s AK party – once a slick media machine – can still not put a consistent conspiracy story together. It has to be said that Egypt’s military coup has not helped the mood of Turkish Islamists – or that in a self-fulfilling prophecy amid so much nuttiness, Turkish bond rates have near doubled in as many months.

What all the many theories lacked – apart from facts, which would “be shortly announced” but never were – was a protean element: something that would lift the whole puzzling debacle of Erdoğan thrashing his own and his country’s reputation over a scraggy patch of grass out of the rational altogether and into another dimension.

Step forward Bulut – TV presenter, commentator, and climber of many greasy poles – who until Gezi was best known for his inordinate use of hair oil. Having got his astral ball rolling by declaring that the protests were paid for by the German airline Lufthansa, afraid that “100 million passengers would be diverted from Germany to Turkey” by a controversial monster airport Erdoğan wants to build near Istanbul, Bulut then took flight.

Turkey’s enemies, he claimed, were planning to assassinate Erdoğan – by telekinesis. “There is work going on in many centres in the world to kill Erdoğan from afar through methods like telekinesis,” Bulut told TV viewers last month. This week Bulut became Erdoğan’s official eminence grise.

Utterly mad it may sound, but there may be method to it – a message to diehard religious supporters that Erdoğan’s erratic, confrontational behaviour may be because he is engaged in a life-or-death struggle behind the scenes.

Should Turks be worried? They should if this offers a glimpse of Erdoğan’s own state of mind. At a mass rally in Istanbul at the height of the protests, he compared himself to Adnan Menderes, the first elected Turkish leader who was hung by the military on a short rope on the prison island where the PKK leader Abdullah Öcalan is now held.

Since then, rather than building bridges, Erdoğan has been busy tightening his grip and settling scores – the latest being robbing engineers and architects who so irritated him over Gezi Park of their overseeing role in planning.

Yet in reality the greatest danger to Erdoğan has always been Erdoğan himself and the company he keeps – from his property tycoon son-in-law to his old Kasimpaşa pals who go everywhere with him and once locked him inside his armoured Mercedes outside a hospital when he passed out during Ramadan. Only five years ago his new chief adviser was attacking him and his party as a “fascist” threat to Atatürk’s secular republic. As a hopeless nostalgic for the Ottoman empire, Erdoğan might be wise to remember that far more sultans died at the hands of their retainers than ever did in battle.