Upon the Taksim Solidarity’s call, people wanted to enter the Gezi Park yesterday and confronted once again with the police crackdown by pressurized water and tear gas bombs; they even tortured the protestors in the middle of the streets. Besides the police, some civilians with machetes also attacked the protestors. Özgür Doğan tells us one of such incidents that he eye-witnessed. 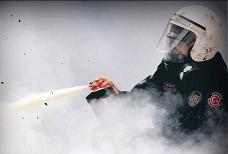 After the Supreme Court’s decision to cancel the Gezi Park construction project and upon the Taksim Solidarity’s call, people wanted to enter the Gezi Park yesterday and confronted once again with the police crackdown by pressurized water, tear gas bombs and rubber bullets.

Besides the riot police, some civilians with machetes who have been called “sensitive citizens” by PM Erdoğan, also assaulted the protesters.

Özgür Doğan, who witnessed one of the assaults by those civilians with machetes in İstiklal Boulevard yesterday, recounts:

“On the 7th of July at about 3 A.M., a Scorpion anti-riot vehicle with the plate number of 34 A 63543 was parked in the entrance of Mis Street. The police in that Scorpion were incessantly firing tear gas bombs into the back streets. For a while, it seemed that the protesters dispersed and it became quiet around. I was talking with two of my friends 20 meters away on the right hand side of the Scorpion. At that moment, there were two youngsters passing by the Scorpion and one of the policemen fired rubber bullets at close range over them for no reason. One of those youngsters was hit by three rubber bullets, and the boy was shocked and ran into a back street to hide.

With my friends, I went to that back street after him to check if he was alright. The boy was infuriated and bewildered. He was trying to understand why the police fired rubber bullets at him for no reason whatsoever. Those two youngsters and I went to the Scorpion and asked the police why they did this. They scolded. There was only one civil police who treated the boy kindly and apologized. However, the three policemen inside the Scorpion shouted at the boy and told him to get lost. As the boy who was in physical pain and was shocked by this arbitrary violence insisted, the policeman who had fired at the boy from the top of the Scorpion opened the back door of the vehicle and shouted, “Look here, I am not like any policeman you know. I am a real man. And don’t let me come down there and f… you!” We took the boy and his friend away from the Scorpion. Then they took the photo of the Scorpion’s plate and left.

After about 5 minutes when I was a bit away from the Scorpion, a group of 3-4 young people started to discuss with the policeman on the wheel of the Scorpion. The policeman on the top of the vehicle, shouted with a rage, “Do not stand here! Disperse immediately, assholes!”, and fired several times rubber bullets at them from a one meter distance. 5 rubber bullets hit only one of them. And he ran away a bit and was surrounded by a crowd.

In that crowd, 3 men intervened. One of them accused of the wounded boy telling lies and pointing to his wound said, “This is an old wound, you dirty liar!” The wounded boy got angry and pushed the man. And the man took his belt and started to beat the wounded boy. I intervened and told him to calm down.  Then he hit me. I shouted at and ran over him, so he ran away. At that moment, one of his friends came from behind and punched me on the jaw just before running away. I ran after him for a while but I couldn’t catch him.

When I got back to the crime scene I saw the boy wounded by the rubber bullets lying down on the ground on a plod of blood. That man with belt and his friends had continued to beat the boy with the belt and had punched him badly. But at least the passers-by that witnessed the incident battered one of those aggressors with short-hair.

That aggressor ran away and I followed him. He stopped in front of the Scorpion and asked some water to drink from the police.  And the police gave him a bottle of water and chatted with him as if he was their close friend. But I am hundred percent sure that the aggressor wasn’t a civil police because he was a bit drunk and when the police first saw him they asked, “Who are you, brother ? What you want?”

Here it is, friends. That’s what happened, what I saw… The police attacking people and insulting them without any reason and arbitrarily… And three men, the partisans of the police, beating a boy to death… This is really too much!”