To support the Gezi Park protests in Taksim, demonstrations in the Bay Area of California started on Saturday, June 1st, in San Francisco. The call for demonstration addressed “all nature-loving people and the media,” and aimed to bring the police brutality to public’s attention. Several hundreds of people gathered in front of the San Francisco’s City Hall to show their solidarity with protesters in Istanbul and also other cities of Turkey. The event program consisted of a moment of silence, event speech, press release, and other free speeches. 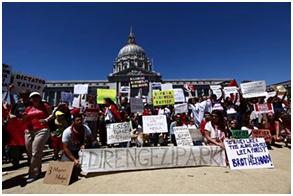 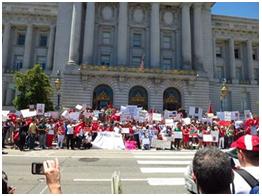 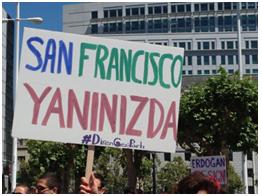 In the following days, the demonstrations in the Bay Area were held parallel to Turkey. On Sunday, June 2nd, another crowded event was held in the Civic Center, San Francisco. On Monday, June 3rd, more than 300 people joined the protest that was held in Palo Alto to “keep this rolling and show [their] solidarity with people in Turkey.” Besides creating more awareness in the US, this gathering also raised attraction to the petition “Condemn the actions taken against peaceful protesters in Istanbul Turkey” that was addressed to the Obama administration. 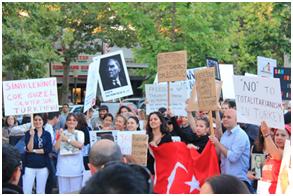 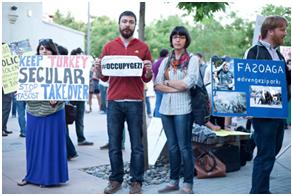 The protests held on Thursday, June 6th, took place in Berkeley and again, in Palo Alto. Almost 200 demonstrators gathered in the Bart Station, Berkeley, called for solidarity, and an end to the police brutality and the profit-driven demolition in Turkey. In particular, the smaller group gathering in Palo Alto joined forces with another protest against the Keystone Pipeline Project to attract the attention of President Obama, who was visiting the city at that moment. Below images are from the Berkeley and Palo Alto events, respectively. 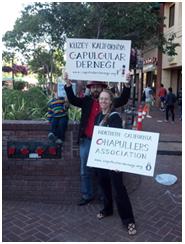 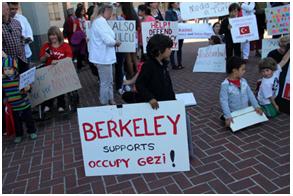 On Saturday, June 8th, again, two demonstrations were organized simultaneously in San Francisco and Sacramento. San Francisco protests took place in the Union Square with the support of around 200 participants. Again, the aim was to expand awareness about the Gezi Park incident and related news about the progress in Turkey, so far. This colorful event housed Rumi rituals and various posters and flags. 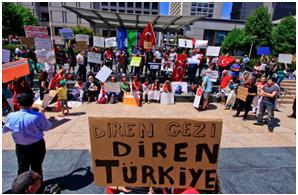 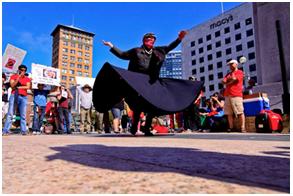 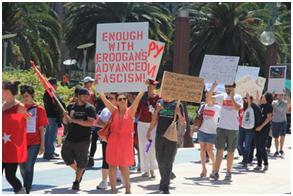 On Sunday, June 9th, another large demonstration took place in San Francisco again, where a group of around 250 supporters came together to unite with other groups who held protests in the other US cities at the same time. “Resist Gezi Park” supporters from New York, Los Angeles, San Diego, Chicago and San Francisco met at this channel to show support and send a “Hello to Gezi” through a live video call that was nationally broadcasted in Turkey. 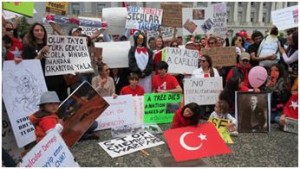 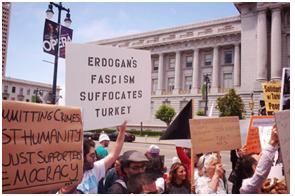