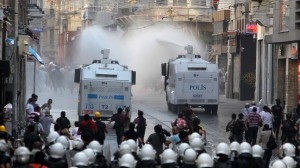 Organizers of Saturday’s protest had planned to serve notice to authorities of a court decision that has annulled redevelopment plans for Taksim and break through police cordons. (Thanassis Stavrakis/Associated Press)

Turkish police fired volleys of tear gas at protesters who tried to enter a cordoned-off park near Istanbul’s landmark Taksim Square on Saturday, hours after the city’s governor warned the demonstration was illegal and participants would be dispersed.

A few thousand people converged on the square, with the aim of entering Gezi Park, whose redevelopment plans sparked anger and morphed into nationwide anti-government protests in June. Organizers had planned to serve notice to authorities of a court decision that has annulled redevelopment plans for Taksim and break through police cordons.

The park has been sealed off since June 15, when police routed environmentalists who occupied it amid around three weeks of widespread demonstrations against Prime Minister Recep Tayyip Erdogan’s government. His opponents say he has become increasingly authoritarian since coming to power a decade ago — charges the government rejects.

The nationwide protests have largely dwindled although thousands of demonstrators have been gathering at Taksim every Saturday for the past three weeks — mostly demanding justice for a protester who was killed by police — before police intervened.

This time, some protesters argued with police over their rights to enter Gezi park before officers in riot gear pushed protesters away from the square with pressurized water and tear gas. They then chased protesters down two main streets off Taksim, again firing tear gas and water cannons. Police later barricaded an entrance to the square.

Private Dogan news agency footage showed one man, with a bloodied face, being helped inside an ambulance. An Associated Press journalist saw a dozen protesters being detained.

An Istanbul court in June ruled against the redevelopment plans that included building a replica Ottoman-era barracks at Gezi. The court’s decision, however, is not final and is expected to be appealed at a higher administrative court.

Istanbul Gov. Huseyin Avni Mutlu had warned that the protest aimed at entering Gezi was unauthorized and said police would intervene. He also said authorities planned to reopen the park Sunday or Monday.

Earlier, police also dispersed a small group of demonstrators who squirted water at each other at the square, in a passive form of protest to poke fun at police’s abundant use of water cannons throughout the anti-government protests. Police shoved the protesters off Taksim using their shields.

At least four people — three protesters and a police officer — were killed in the protests that swept Turkey in June. The use of force by police against demonstrators, including the firing of tear gas directly on protesters and in closed spaces, drew criticism from human rights groups and some of Turkey’s allies.