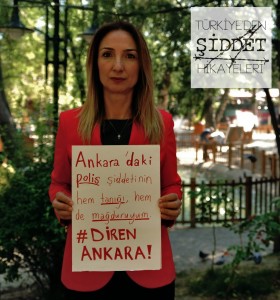 The ones who flooded the streets in Ankara during Gezi Park Resistance, saw her around 4am in the morning trying to deter the police from violence, while the ones who were detained and taken to police stations got to know her while she was objecting to unlawful practices. CHP (Republican People’s Party) MP for Ankara, Aylin Nazliaka, talked to “Violence Stories from Turkey” about what she witnessed on the streets during the weeks marked by the violent language of the government, and about the people she met during the Gezi Park Resistance and “remorseless” police violence.

The arbitrary obscuration of public transport in Istanbul and closing down of Taksim square on May 1st, police oppression, interventions to living spaces, alcohol and family planning discussions, urban space discussions starting with Emek movie theater, all these came together in Gezi park events. What is the thing that society reacts the most?

It is now seen that the impositions over freedoms and lifestyles caused an accumulation of rage, and people coming from different lifestyles and different political views gave a common reaction. Everyone says “Don’t interfere with my choices, don’t touch my freedoms”. Although, the events started with a protest specific to Gezi Park, what is going on is actually a revolt against a fascistic understanding of governance. People can not take any more impositions of the government on such things like what to wear, what to eat and drink, how many kids to make and how these kids will be born.

People out on the squares say, “We are not able to make ourselves understood by the government”. Do you experience a similar communication problem with the government as a member of the parliament?

Until today, the dictate of majority prevented pluralism in the parliament. They constantly conveyed this feeling: “We have more votes than you. So, whatever you do, you will never be able to implement any legislation you wish”. We did not give up the struggle but we always witnessed the reflections of an oppressive regime in the parliament. Many times, I thought “instead of making these people MPs, their hands would rather be enough as MPs ”. Sensible resolutions we offered to the parliament were not accepted just because AKP group members did not want so.  As you can see, the parliament was dysfunctional; the way to the dialogue was closed as it is in government’s relationship with the citizens. However, we saw that AKP members also started to feel the discomfort from all of this. Maybe they do not explicitly express it like Ertugrul Gunay did, but they make us feel it somehow. There are MPs who start to feel the courage to express different opinions. There is a serious crackling within AKP now, and we also hear that some of them hardly stop their kids from joining to the protests.

Do you believe that you can express yourself better in the parliament after the social warning?

Erdogan got frayed out on both national and international arenas. He is trying to cover it up by the only thing left in his hands is violence. Moreover, he says that this police violence that is deployed to persecute the people will get stronger. The same patronizing mentality is present in the parliament as well. There are no sign of a communication getting more moderate in the parliament. We cannot talk about an improvement unless the orders given by the leader change. It is nothing but this mentality that causes this social revolt.

I was in Kugulu Park this morning and there was another harsh police intervention. Some friends were beaten. Hundreds of pepper gas canisters were thrown. Police intervention happened when people were in a passive resistance mode. Police even intervenes to the people who just stand. There is a prime minister who does not know what to do against people who do not speak the same language of violence he speaks. Erdogan failed in this process; he could not understand these protesters and he insists on not understanding. Every word he utters deepens the crisis. If there are similar movements in 78 provinces, and the whole world is talking about Turkey, it is only the Erdogan who induces all of this. He needs to get out on the streets and listen to people instead of meeting with artists who haven’t been in Gezi Park.

It was the harshness of the police violence that brought people from many different walks of the life together. What happened in Ankara between police and the protesters?

As a code of behavior, siding with the oppressed dominates in our country, Erdogan piled on this agony to gain support until today. But now the whole world sees that he turned into a dictator that oppresses his own people. This oppression is what held people together. I both observed and experienced in person the police violence in Ankara. The methods of the police cannot be described with words like proportionate or disproportionate; police used a remorseless violence in this process. People used to say “Help, Police!”, now they say “Police! Help!” I witnessed many interventions, people being taken into cars, being beaten, mauled, and handcuffed backwards… On Sakarya Street, we could hardly rush someone to the hospital, who lost an eye because of a gas canister hitting his face. I saw youngsters who walked into an army of riot police alone after hearing screams of a friend. At the police stations, people were photographed and indexed; the attorney general did not have an order about it, though. This stopped with my objection but as soon as I left the station, they continued to do that. I personally took some people to hospitals, because we also know that people were taken by 112 emergency ambulances to the hospitals which are far away and also being tagged, there. So, tagging is not limited to police stations.

It is being discussed that these indexing in the hospitals guide the detention operations. During the detention wave at the beginning of this week, there were even injured people who had appointments for surgeries. While you were out in the streets, how did the police treated the injured people?

I saw people who were stroke by gas canisters on the leg or other parts, not fatal but requiring emergency medical intervention, being detained. Although, I requested again and again, I could not convince the police to take the injured people to the hospital first.

One of the most controversial places in Ankara these days was Kizilay Shopping Mall. There was a wide discussion about how people who took refuge here were delivered to the police. You were there to interfere on the night of June 3rd. What did happen that night?

I went there after I saw on social media that the police had set a trap there. Young people are resisting and taking the risk of being unemployed in the future, living with a police record all their lives. I, on the other hand, have legislative immunity; I would not be able to sleep at nights while they were sacrificing that much. With this in mind, I went to Kizilay Mall amidst flying gas shells. The building was surrounded with police and there were people who were taken refuge inside. They were detaining anyone they saw, cramming them into vehicles, treating them harshly. They jammed the buses with tens of people, ranging from 14 year old girls to 70 year old grannies. I tried to interfere because I knew the police was resorting to violence against people who do not use violence, and I knew there was indexing under custody and in the hospitals, but my attempts were not successful.

Was there any change in the attitude of the police when you said you were an MP?

Nothing changed in their attitude that night, moreover, I became recognizable by the riot police as days passed by and they resorted to more violence whenever they saw me. One day, they started water cannoning when they saw I was approaching and I had to move away to protect others to be harmed as well. In a way, legislative immunity remained on paper… In the meantime, I saw that the police implemented all the harsh orders they get. Erdogan is desperate in this process, and he run the risk of all kinds of violations of law. It is evident who will lose eventually.

These events were no the first time Turkey did faced to the police violence. Law of Police Powers gives police the authority for a heavy intervention since 2007. Will you take a step about this in the parliament?

Regardless of the orders given, there is no conscientious explanation for what has been committed, shooting Ethem in the head, targeting people with gas canisters from half a meter, water cannoning people in a passive resistance. Neither the history, nor the people will forgive these. We will do what we have to do through the legislation but what kind of law can explain concealing the helmet numbers? This is the most significant indication of unlawfulness. We already lost 4 lives and more than 7 thousand people were injured. The whole society suffered the psychological trauma. The ones who do not see this violence, who do not understand the people put the blame to the external powers and interest lobbies.

Protesters who try to resist the police in Ankara know you very well. During the time you spent with them, did you see the elements that have been described as “marginal, illegal groups” by the government?

I saw extremely innocent people who knew what they were doing, who went out because of the interventions on freedoms, because of environmental awareness; not marginal or terrorists. I witnessed the amazing solidarity between them. The generation that is defined as Generation Why is a questioning, tech-savvy, individualistic but also inclined to team work, and a vindicating community. If they cannot find the balance between work and personal life, if they do not like what they are doing they can even prefer being unemployed, in a way they cannot be attained with money, they are distant from the culture of submission. They are able to put out very creative things without using the language of violence. Not knowing how to struggle with this creativity, this was exactly what made prime minister desperate. To be able to get along with this generation, we, as politicians, have to prove our sincerity and authenticity. Unlike how it was in the past, we have to develop a more equitable way of relationship with the society.