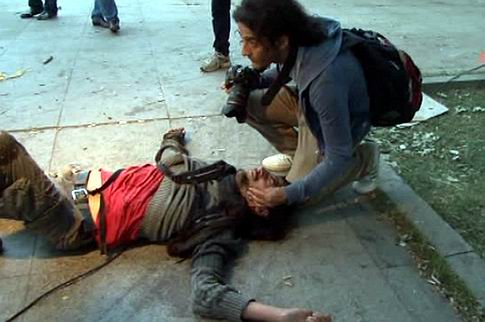 Videos of the police attack on Hazar Tunca during events following the police intervention aimed at breaking up the gathering in Taksim’s Gezi Park have been released.

He got to the tree before the bulldozer and shielded the tree
It seems that Tunca reached a tree before a bulldozer, and tried to protect the tree from destruction. However undercover police officers arrived within seconds and one of them started to hit him vigorously.

He stood up, but wasn’t able to walk
After being pulled and dragged by someone, Tunca walked for a while. But, he fell down and failed to move.

Istanbul University’s Archeology student, Hazar Tunca’s (21) testicles were partially torn off during the police attack in Taksim Gezi Parkı. The torn testicles were stiched back on. The incident  was recorded by the DHA reporters.

He screamed out in pain
In the video, university student, Tunca is running towards a tree. As he was trying to embrace the tree in order to protect it, the police were attacking him. It is clearly shows  an undercover police officer kicking Tunca’s knees. Suffering from intense pain for a while, he stood up. After taking a few steps, he fell down and could not move. Afterwards, he was taken to hospital with the help of a friend.

Following the surgery, he is in good condition
According to the information given by the health officers of Şişli Etfal Training and Research Hospital, Tunca has been sent to urology polyclinic and taken into surgery, following the first intervention in emergency room. Having a torn testicle and bruises in his genitals, it is stated that Tunca is in good health and has to spend a recovery time in the hospital.