Turkish Prime Minister Recep Tayyip Erdogan is to meet the organisers of ongoing protests against his government on Wednesday, says his deputy. 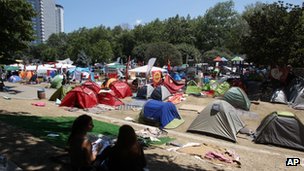 Bulent Arinc said Mr Erdogan would “listen to their thoughts”, but added that illegal protests would not be allowed.

The prime minister has taken a tough line with the protesters.

The anti-government unrest was sparked by a police crackdown on a local protest over an Istanbul park.

The protests then widened, with demonstrators accusing Mr Erdogan’s government of becoming increasingly authoritarian and trying to impose conservative Islamic values on a secular state.

The demonstrations are now in their 11th day, with protesters controlling much of Istanbul’s Taksim Square.

There were also reports of new clashes on Monday night between security forces and demonstrators in Ankara.

For a third night in a row, riot police fired tear gas and water cannon to disperse demonstrators in the city centre, AFP news agency reports.

Mr Erdogan has previously called the demonstrators “looters”, warning them that his patience was limited.

But his deputy confirmed that the prime minister had agreed to meet the protesters.

“The prime minister gave an appointment to representatives of some of the groups that have been organising these protests – he will meet some of them on Wednesday upon their request and he will meet other groups in the coming days,” Mr Arinc was quoted as saying.

“They will be briefed on the facts and our prime minister will listen to their thoughts.”

The unrest spread after police moved to suppress environmental protests over the redevelopment of Gezi Park, which is part of Taksim Square.

More than 5,000 people have been injured and three people have died since the protests began.

Mr Arinc, speaking after a long meeting between Mr Erdogan and his cabinet, said the government would follow the guidance of the courts over Gezi Park. The protesters say plans to redevelop of the park are in violation of a court ruling.

“Illegal demonstrations will not be allowed anymore in Turkey,” he said.

“All necessary actions against illegal acts will have been completed, and we will see this all together, by the weekend.”

Mr Erdogan has repeatedly vowed to push ahead with the redevelopment of Gezi Park.