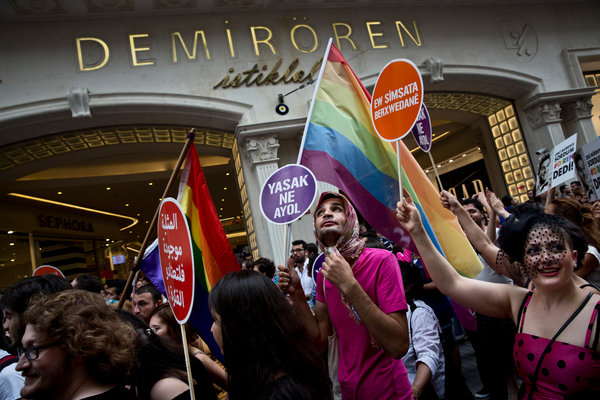 Ed Ou for The New York Times
Thousands of marchers, many of them holding rainbow flags and chanting slogans denouncing government policies that discriminate based on sexual orientation, filled the streets of Istanbul on Sunday.

At least 20,000 demonstrators marched in support of better treatment and equal rights for lesbian, gay, bisexual and transgender people.

When the first gay rights parade was organized here in 2003, only a few dozen people dared to take part. But on Sunday, at least 20,000 people joined the march, many of them holding rainbow flags and chanting slogans denouncing government policies that discriminate based on sexual orientation. And although memories of the police crackdown on protesters were still fresh, Sunday’s event was peaceful.

Demonstrations initially focused on saving Istanbul’s central Gezi Park from destruction grew in response to Prime Minister Recep Tayyip Erdogan’s autocratic and dismissive reaction toward the protests, a criticism that echoes the longstanding complaints of lesbians, gay men and bisexual and transgender people in Turkey.

“Together with Gezi Park resistance that got spread throughout Turkey, we cried out loud our demand for a world that is not homophobic, transphobic and sexist,” a statement issued by the organizers of Sunday’s parade said.

“Today, we together stand against the government’s attack on homosexuals and trans individuals’ rights to live, work and housing.”

In 2002, before he became prime minister, Mr. Erdogan promised greater legal protections for members of the L.G.B.T. community, but in March he called homosexuality “a sexual preference” that “contradicted” Islam, according to a report in the Turkish newspaper Hurriyet.

“We were hopeful back then,” said Yildiz, a cross-dresser who attended Sunday’s march holding a rainbow umbrella. But now “we receive bad treatment from the police and the judiciary on made-up grounds.”

Cross-dressers often complain about having to pay heavy fines when they are stopped by the police, who say they defy the public order by dressing improperly or blocking traffic.

“The police fine us even during daytime when we go out in regular clothes, without makeup, and they do not even explain why we happen to destroy the order,” Yildiz said.

“Courts do not even accept our appeals,” said another protester who was holding a banner that said “Gays exist.”

At least 18 transgender Turks were killed in hate crimes last year, according to a joint statement released by L.G.B.T. groups at a rally last week.

“We are here because homosexuals and transsexuals get kidnapped by families and disappear,” the statement said.

In a predominately Muslim society with strong religious and conservative tendencies, gatherings like the gay rights parade troubled many people, including some who took part in the recent protests over Gezi Park.

But for others, the desire to reclaim the sense of a common purpose that drew people together during the Gezi protests was reason enough to offer their support for the marchers on Sunday.

“No one feels alone any more after the Gezi protests,” said Meryem Koyuncu Igili, who was walking arm in arm with her husband, Metin, as they marched in their first gay rights parade.

Mr. Igili held a banner that said “Even if we are gay,” a message that a person’s sexual orientation should not matter. “It’s, after all, not just L.G.B.T. members, but all of Turkey under oppression,” Ms. Igili said. “We no longer see anyone different from one another, and seek rights for all.