Umur Can Erşahin, who was shot with a tear gas cartridge on his head during Gezi Park protests, says, “I will not change because of this incident.” 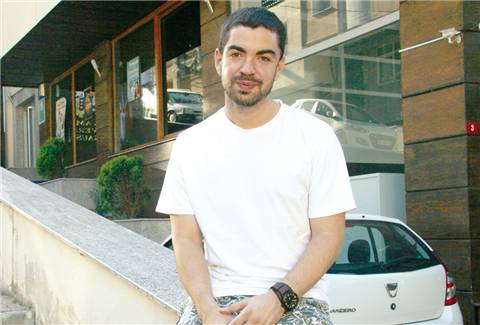 Umur Can Erşahin, 27, suffered from a cerebral trauma and hemorrhage after being hit by a tear gas cartridge which was fired from a distance of 10 metres. Erşahin says: “If violently attack the police officer who shot me, would I be any different from him? I am not going to be different person because I was hit on my head. I will challenge any injustice by sharing, talking and negotiating, not through rage and violence.” Erşahin is the director of a dance school. He teaches hip-hop classes and has won the Turkish Championship of Hip-Hop. Although he was injured very recently, he looks fully recovered and dynamic. “Dance is my life and I was dancing even in the hospital” he begins and tells his story:

PROTESTS AGAINST THE VIOLENCE: We have launched social responsibility projects with Beşiktaş Municipality. On June 1st, an event named ‘Meeting of Cities with (self-) Confidence’ and organized by social democratic municipalities took place at CNR EXPO. We were going dance for women’s rights. As there have been police interventions in Taksim on the previous few days, we decided not to dance but perform an act of being subjected to aggression. Later that day, my father and I went to Taksim and learnt that there were fierce clashes in Beşiktaş. I had friends there, so thinking of getting them to Taksim I went to Besiktas.  As I was walking by the 15 metre-tall barricade somewhere around İnönü Stadium, I noticed that I was at the very front. There were two TOMA’s (Riot Intervention Vehicle) beside me. I didn’t chant a slogan or throw a stone. I never did in my life. TOMA targeted and fired water cannons at me. I stepped behind a tree and looked behind to see police running towards the crowd. To warn the people around me I shouted ‘Run away!’ People started to run. I didn’t move from that spot until everyone was gone.

DON’T PASS OUT TO STAY ALIVE: Since the crowd was dispersed I thought that police would not attack any more and that I should stop right in front of them. During such times, one does not think rationally. When the police was only 10 metres away, I opened out my arms and said ‘Don’t fire any more teargas grenades, people are already leaving’. As I turned around and took two steps, a tear-gas cartridge hit my head. It was all white because of the gas. I could barely see but couldn’t hear, feel and move my body. I thought I shouldn’t pass out in order to stay alive. Nazif Türkan, whom I had never met before, approached me. Apparently, he was shouting, “run, the police are coming,” but I could not hear him. TOMA kept firing water cannons at me although I was lying motionless on the ground. Pressurized water pushed me two meters away. At that point, Nazif grabbed me from my arms and carried me.

MOM LET’S TALK LATER: Then Lütfi, whom I didn’t know either, came to help. We entered Swiss Hotel. After the initial numbness, my head started to hurt. Trying to give me strength, people continuously held my hand. I was trying not to pass out by holding their hands very tightly. When I was on the ambulance, my mother called and I answered, “Mom, it’s really crowded, let’s talk later”. At least 30-40 minutes had passed when I arrived Şişli Etfal Hospital. I was suffering from cerebral hemorrhage but they didn’t operate on me as bleeding was contained. I had five or six small fractures on my head accompanied by a cerebral trauma. I stayed in the hospital for 5 days. To minimize the risk of seizures, I have to take my medication for months and avoid any head trauma. I still can hardly open my mouth while eating.

THOSE WHO HAVE VIDEOS, PEASE LET ME KNOW: I want to file a criminal complaint, but I need visual evidence recorded at that time and place. I don’t think Turkey is a state of law. That police officer, [who shot Ethem Sarısülük] and his superiors should be justly punished.

IS IT YOUR RESPONSIBILITY? Some ask, “Are you going to save the country?” I reply, “Yes, I am.” If some people didn’t work to save the country 90 years ago, we wouldn’t be here now. Everyone has responsibilities and duties. I am pro-Atatürk but I don’t worship Atatürk. I respect and defend his works and endeavors, which he entrusted to us. I never discriminate against people or label anyone. All one can do is share and exchange ideas. One may not find a common ground, but one cannot ever assault others. Today, people meet at the parks for peaceful discussion panels. There’s no anger, violence or aggression subjected against opposing ideas. This is how a democratic environment should feel like. I am very hopeful. I am not going to be a different person because of this incident. I will continue to express my disagreement and my opinions by sharing, talking and finding a common ground, not by ways of rage and violence.