Not just the mobilizational power but also the spirit of Gezi pervades objections to electoral manipulation, defying the AKP’s attempts to snuff it out. The wickedly humorous wit and creativity used to critique the AKP’s brutal police crackdowns that drove millions of people to the streets during the height of the Gezi protests in 2013 are being deployed in full force to delegitimize the handling of the elections. 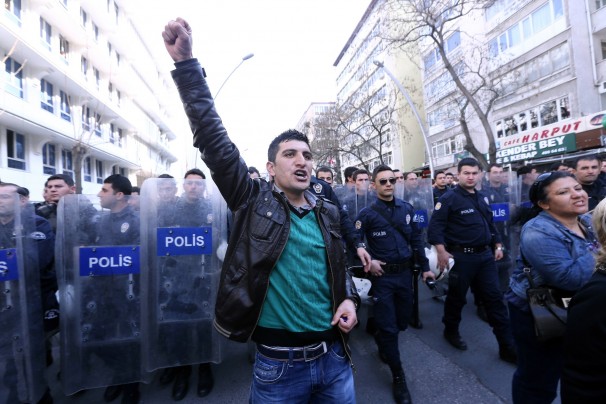 A man gestures during a demonstration as police block protesters attempting to march to Turkey’s Supreme Electoral Council (YSK) in Ankara April 2, 2014. About 2,000 supporters of the main secular opposition party had massed on April 1 outside the elections authority in the capital Ankara and were met with police water cannons, as they claimed vote-rigging in weekend local polls in which the Islamic-rooted party of Premier Recep Tayyip Erdogan declared sweeping victories. (ADEM ALTAN/AFP/Getty Images)

After local elections on March 30, Turkish opposition figures are up in arms, claiming to have incontrovertible evidence of widespread voting fraud and calling into question the institutional integrity of Turkey’s electoral system for the first time in recent history. While criticized for many other democratic deficiencies since the establishment of the republic in 1923, Turkey has generally been recognized by the international community as holding free and fair elections. The majoritarian victories and even consistent electoral gains of the ruling Justice and Development Party (Adalet ve Kalkinma Partisi, or AKP) over the last three general elections were accepted as legitimate. Unprecedented as they were, these election wins were understood mainly as approval of the tangible benefits available to AKP supporters during Turkey’s period of sustained economic growth and general political apathy or lack of a credible alternative among its opposition rather than as any kind of electoral foul play.

As opposition members presciently suggested before last Sunday’s elections, however, growing indicators pointed to AKP’s attempts to tilt the votes in its favor, no matter the cost. Independent news reports confirm what thousands of poll station volunteers have been tweeting and posting, circumventing the government’s already highly criticized bans on Twitter and YouTube to document instances of ballots pre-marked for the AKP, votes for opposition parties discarded, massive registration irregularities, armed attacks on opposition supporters and vehicles, and voting by undocumented Syrian refugees incentivized by AKP groups. For the quantitatively inclined, preliminary analysis of voting in the hotly contested mayoral race in Ankara, for example, demonstrates a statistically significant relationship between ballot boxes with greater numbers of invalid votes and ballot boxes favoring the AKP. Many more ballots were recorded for the main opposition Republican People’s Party (Cumhuriyet Halk Partisi, or CHP) at polling stations in Ankara than were registered at the Supreme Election Board, and election monitors claim that the ballot box used by Ankara’s CHP candidate Mansur Yavas contained zero votes for his own party. Clearly, something is newly amiss in Turkey’s elections.

What went wrong this time?

A proximate cause might be the corruption investigation – also unprecedented in Turkey’s history in terms of scale and scope – initiated in mid-December 2013 and unfolding online like the soap opera serials for which Turks are famous, with a new, secretly recorded transcript leaked and immediately going viral nearly every evening. The content of the alleged recordings ranges from discussions between Prime Minister Recep Tayyip Erdogan and his son about how to hide massive amounts of cash (which Erdogan dismissed as a “montage” fabricated by his enemies rather than disputing outright the nature of the discussion) to Erdogan’s haranguing a newspaper owner to the point of tears over his publication’s critical coverage of the AKP’s Kurdish strategy. In a would-be-laughable-except-it’s-terrifying case of “Wag the Dog,” the Turkish foreign minister, national intelligence chief, and deputy chief of the general staff allegedly discuss the ease of justifying an intervention in Syria through provocative military operations.

Following thousands of reshufflings in the police and judicial institutions that were spearheading the corruption investigations – and believed by Erdogan to be trying to sabotage his party’s electoral chances at the behest of former ally and now rival Islamic cleric Fethullah Gülen – the shutdown of Twitter and YouTube demonstrated yet again how far the government would go to maintain its vise-like grip on power. Like many of the government’s recent efforts to crack down on opposition, however, its move to deny social media access to an Internet-saturated population proved both useless and embarrassing. Princeton-based Turkish economist Dani Rodrik tauntingly tweeted that his 84-year old mother was back on Twitter 30 minutes after access was blocked: “No sweat.”

Turkey’s tech-savvy teyzes (elderly women) aside, a corruption scandal alone seems insufficient in accounting for the magnitude of electoral manipulation observed. And why now? Corruption, in various forms, has long been a mainstay of Turkish politics across the ideological spectrum. While the center-right AKP’s preferred moniker of “AK Parti” – or “pure party,” as ak means “white” or “clean” in Turkish – was deliberately used by its supporters to connote a new party tradition of clean politics, the sweetheart deals to supporters and other corrupt practices emerging from the leaked tapes may confirm what critics suspected about the shady foundations of Turkey’s recent economic development and particularly its construction boom. However, that doesn’t seem to diminish the loyalty of its faithful following. There’s initial exit polling evidence to suggest that the corruption scandal had no substantive effect on voting behavior of either (still significant) supporters or dissenters.

A more plausible explanation of Turkey’s electoral sham lies in the evolving nature of its opposition, a continuously shape-shifting entity that Erdogan and his party can neither understand nor control. While opposition parties struggled to contest the AKP’s growing power during much of its rule, the Gezi protests – which began the summer of 2013 as a small environmental movement and exploded across the country following viral images of police brutality against peaceful protesters – unleashed a tidal wave of simmering resentment against the government’s increasingly authoritarian practices and opened up new channels of political participation. Turkish youth in particular, many of whom previously showed little interest in politics, but also women, Alevis, LGBTs, staunch secularists, and millions of others rallied in protest against the AKP’s patronizing and even demonizing treatment of those who opposed it. Peaceful demonstrators during the Gezi protests were called delinquents, looters, and terrorists, and accused of disgraceful actions such as attacking and urinating on a veiled woman and drinking alcohol in a mosque – all of which proved to be false.

More recently, demonstrators mourning the death of 15-year old Berkin Elvan, who was hit in the head by a teargas canister as he went to buy bread during the protests, were called necrophiliacs. This repeated “othering” behavior by the AKP, far from delegitimizing and demoralizing its critics, has instead fostered a sense of solidarity among otherwise disparate segments of Turkey’s society. How long this solidarity in opposition formed during Gezi will last is unclear, but it currently serves as a basis for mobilization with which the AKP continues to prove inept at handling, seen in this week’s violent dispersal of those gathered outside the Supreme Election Council to demand recounts.

The president of the cat lobby declared “I gave the orders”!

Not just the mobilizational power but also the spirit of Gezi pervades objections to electoral manipulation, defying the AKP’s attempts to snuff it out. The wickedly humorous wit and creativity used to critique the AKP’s brutal police crackdowns that drove millions of people to the streets during the height of the Gezi protests in 2013 are being deployed in full force to delegitimize the handling of the elections. The symbolic animal of choice this time around – in place of Gezi’s penguins, which were displayed to protest CNN Turk’s showing of a penguin documentary while CNN International broadcast live images of police violence in Istanbul’s Taksim square – is the cat, referencing a comment by Turkey’s energy minister that a cat entering a power distribution center was to blame for power outages during ballot-counting. With electricity cuts delaying, and arguably distorting, procedures in over a third of all provinces, satirical memes depicting maps of cats’ pervasive mobilization across the electoral map and cats appearing stunned to be accused of such actions effectively mock both the ridiculousness of the excuse and, at a deeper level, the fickle nature of the rule of law in Turkey. Cat-themed critical humor has spread from social to traditional media, with a “cat lobby” meme published in Turkey’s most widely read English newspaper poking fun at the tendency of the AKP government to blame its many problems on nefarious international “interest lobbies” working covertly to prevent Turkey’s rise as a great power.

From foreign spies to terrorists to necrophiliacs, being in the opposition camp in Turkey doesn’t look pretty. This delegitimizing rhetoric appeared again during the elections, with Erdogan deeming opposition forces “worse than Assassins,” referring to medieval groups that would murder their rivals to produce instability. It is this factor – the absolute unwillingness by Erdogan and his government to attribute legitimacy to any form of opposition – that best explains the electoral manipulation Turkey is experiencing. For a prime minister who declared to those objecting to his style of rule during Gezi: “We will see at the ballot box,” there was no room for allowing an opposition he can’t comprehend or respect to take the seats of power in key cities such as Ankara and Istanbul. His victory speech, vowing that those who opposed him will “pay the price,” was positively chilling in this respect.

On a larger scale than the electoral irregularities and their ongoing contestation, it is this larger issue of legitimacy of opposition, and the knee-jerk reaction of demonizing anyone that defies or disagrees with the AKP’s will that poses the greatest obstacle to democratization in Turkey. To be sure, Turkey has struggled, and continues to struggle, with issues such as minority rights, freedom of expression, free press, gender equality, and other fundamental components of democracy since the establishment of the republic in 1923. Now more than a decade into the 21st century, some advancements have been made under AKP rule – such as increased religious expression for Sunni Muslims in the public sphere – but the simultaneous undermining of previously established rights and freedoms suggests the AKP seeks to institutionalize a regime that tailors rules and institutions to suit its own values rather than be representative of – or even listen to – Turkey’s entire electorate.

The AKP government’s behavior in the run-up to and aftermath of the 2014 local elections is indicative of a much broader and deeper problem. There is a colloquial Turkish expression – olmazsa olmaz – meaning that if a component of something is missing, then the “something” itself just can’t be. It denotes a prerequisite of sorts, a typical Turkish example of which might be “No melon and white cheese, no raki meal.” It’s simply not a meal at which you would drink raki if the other elements were missing. This brings to mind a phrase well known to political scientists that sums up the Turkish case: No opposition, no democracy.