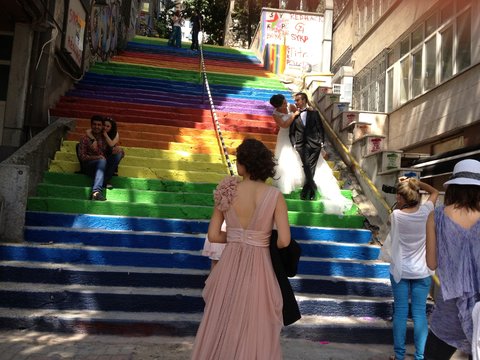 In Istanbul, known as the city of seven hills, dozens of public stairways crisscross centuries-old neighborhoods, giving pedestrians a way to avoid heavy car traffic on the streets.

Those walkways generally attract little notice, but that changed last week, when a retired forestry engineer decided to paint the Findikli stairs in the central district of Beyoglu in all the colors of the rainbow — an act of guerrilla beautification that unintentionally triggered a fresh ripple of anti-government protests.

Almost as soon as the paint was dry, residents of the city were posing for pictures on the uneven and rundown, but newly bright, steps connecting Findikli to Cihangir, a liberal neighborhood frequented by artists.

The retiree behind the caper, Huseyin Cetinel, 64, told the local news media that his original motivation for applying a fresh coat of paint to the stairs was not activism, but the desire “to make people smile.” Mr. Cetinel said he spent nearly $800 on paint and devoted four days to sprucing up the stairs, with help from his son-in-law.

“Don’t you think Findikli Stairs are just amazing? Thanks to those who did it,” one Twitter user wrote last week.

Other Turks on the social network, assuming that the painting project was related to calls for equal rights for lesbian, gay, bisexual and transgender people in Istanbul, posted messages of solidarity. 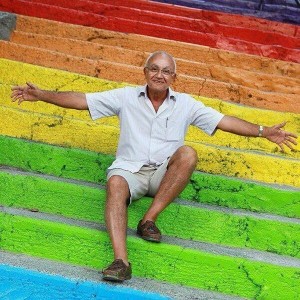 Huseyin Cetinel who painted the stairs in LGBT colours.

What transformed the painted stairs into a political issue was the surprise that Findikli residents woke up to last Friday: the stairs had been hastily, and somewhat unconvincingly, repainted in their original color, a dark cement gray.

Speaking to Turkish television reporters after the stairs were painted over, Mr. Cetinel pointed out that all of nature — “cats, birds, flowers, mountains” — is brightly colored. “Where does this gray come from?” he asked. “Did we have another Pompeii and got flooded with ash?”

To the mainly young, educated and liberal Turks who rallied this year against the autocratic tendencies of the ruling, Islamist Justice and Development Party, the covering of the rainbow stairs seemed to be yet another sign of intolerance and a lack of respect for their right to claim public space.

Activists began organizing on Twitter almost immediately, using the hashtag #DirenMerdiven, or ResistStairs — a reference to the hashtag used for protests in June against government plans to build a shopping mall in place of the city’s Gezi Park, #DirenGeziPark, or ResistGeziPark.

The next day, as calls to repaint the Findikli stairs in bright colors spread on Twitter and Facebook, the Beyoglu municipality first denied, then admitted, that it was their workers who had painted the stairs gray. Before the municipality joined the effort to bring back the rainbow look, people across Turkey had already taken up brushes in solidarity and painted public stairs in their cities in similar colors.

“The most colorful protest,” a local newspaper announced over a collage of images of projects from Ankara to Izmir.

For many Turks who visited the Findikli stairs this weekend, the paint duel seemed to be yet another demonstration of a government bent on controlling their public and private lives.

“There has been some movement in the society, a social uprising together with the Gezi Park protests, and this is just an extension of that spirit,” said Nalan Ozgul, a financial adviser, as her daughter, who was visiting from Paris, nodded in approval. “The fact that the government-run municipality first denied having painted over the stairs, then agreed to paint them back in color, shows how desperate and indecisive they are about their policies.”

Rather than cementing government control, any sense of oppression brought more people out into the streets, she added, so authoritative policies were doomed to fail. “I would not have come here if they haven’t repainted this over in gray, so here I am with others,” she said.

On Sunday, a bride, Gamze Ozmermer, showed up with her groom at the Findikli stairs to pose for wedding photographs. “Where could be a better setting?” Ms. Ozmermer said, neatly adjusting her veil.

“The air of conflict that our world is caught in, all those human losses, misery need healing,” she said. “Colorful scenes might be a remedy.”