The Gezi Park events marked a turning point in the global unrest we’re living through. Though not officially a Bric country, Turkey has most of the attributes of one – high growth, a young population, a repressive state prone to corruption and arbitrary action. So after Gezi it was no surprise to see Brazil’s protest movement spiral into a million people on the streets. Nor the 17 million taking part in the demonstrations that toppled Mohamed Morsi in Egypt, nor the Ukraine protests that are still under way…The networked character of modern society makes country-specific unrest predictions pointless. 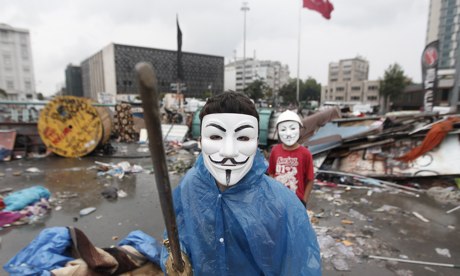 It was like a CD track skipping, or a video suddenly jerking to the next scene. I was filming on a barricade in Istanbul, carefully resetting my shot to be out of range of police firing CS gas canisters when one hit me in the forehead. The dent it made in my helmet now forms part of a cautionary PowerPoint presentation on journalists’ safety training courses.

During the Gezi Park occupation perfectly ordinary middle-class people built barricades that kept Turkish police at bay for four nights. Inside the park they formed a makeshift version of the society they would like to live in. They piled up a mountain of free food, sang songs and drank beer in defiance of the conservative religious government.

By day the grass was covered with students doing their homework. By night the approach roads were filled with masked young men – the football fans swapping scarves to signal a truce in the 100-year hatred between Istanbul’s clubs. When I asked what their jobs were, they whispered back: “architect, shipping clerk, software engineer”.

The Gezi Park events marked a turning point in the global unrest we’re living through. Though not officially a Bric country, Turkey has most of the attributes of one – high growth, a young population, a repressive state prone to corruption and arbitrary action. So after Gezi it was no surprise to see Brazil’s protest movement spiral into a million people on the streets. Nor the 17 million taking part in the demonstrations that toppled Mohamed Morsi in Egypt, nor the Ukraine protests that are still under way.

These societies were supposedly the beneficiaries of globalisation and marketisation. But up close, the rising middle class felt shut out. So now “masked guy with gym membership who hates corruption” has joined the “graduate without a future” on the list of social archetypes through which we try to understand the unrest.

If you read the Economist Intelligence Unit’s latest attempt to guess where it will kick off next, it becomes clear how hard this is to do with conventional thinking. For the unit it is places with high inequality, heavy corruption, economic crisis and a collapse in trust. So Nigeria (the biggest economy in Africa), Egypt and Argentina all figure high on the red list of countries where there is a “very high risk” of conflict threatening the political order, with Brazil, South Africa and China merely “high risk”. Though an advance on the straight-line thinking that linked revolts simply to the post-2008 economic crisis, I still think this misses something. When people ask me where it is going to kick off next, I say: “In people’s heads.”

The scale of repression now, even in stable democracies, is so high that those with a grievance take much longer to trip over into action that risks arrest. Though their armed forces are increasingly wrapped up in concerns about the laws of war, there is no Geneva convention in the modern conflict between riot cops and protesters. So what looks like acquiescence is not that. What looks like social order is merely the skin on a deep disorder. China watchers are used to this concept. The Chinese internet is seething with discontent, even as everybody in public bows down to the official line. But at a more general level it is true across the developed world. In the past there was very little to fear from movements that were all ideas and little action. But we live in an information economy now. Critical ideas have a materiality to them, and repression seems to fuel critique.

Chelsea Manning and Edward Snowden have hardly been made folk heroes in the western media. But in the informal world, the world of online conversation, they are metaphors for “what happens”. Challenge unlawful state surveillance, spill the beans on military atrocities in Iraq and you become a candidate for Guantánamo-style torture and mind games. In such a situation “metrics” – on poverty, inequality or trust – are hardly relevant in the prediction of unrest.

Despite this, the analyst group Gartner earlier this year, predicted “a larger-scale version of an Occupy Wall Street–type movement will begin by the end of 2014″. Gartner’s analysts got closer to the reason. Information technology is reducing the labour content of goods and services “in an unprecedented way”. We have doubled the ratio of labour to capital by urbanising the global south and marketising the former communist countries. But there is no clear route to high-wage, high-prosperity lifestyles for a large part of the world’s population. As a result, predicts Gartner, by 2020 this will lead to “a quest for new economic models in several mature societies”.

The networked character of modern society makes country-specific unrest predictions pointless. There is, in reality, one political entity that matters. Right now it is more unequal than it’s ever been; its core economic model is destroyed; the consent of its citizens to be governed is eroded. It is the world.