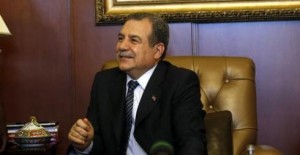 Reminding that 3 policemen were suspended within an investigation and announcing today’s general strikes as “illegal”, Interior Minister Muammer Güler said they are working on social media.

Interior Minister Muammer Güler made a statement on the Gezi Resistance. “We are working on the social media. We believe we need to do some legal regulations there,” he said.

Some of the highlights from Güler’s speech are as follows:

“It is impossible to understand the stubbornness behind the continuation of violent acts. They are trying to push people out to streets by strikes, we will not let this happen.”

“Gendarmerie continues its duties in some districts”

“Police forces work in cities, gendarmeries work in the countryside and coast guards work in seas. I can assign them elsewhere whenever there is a need. If needed, police can also work in gendarmerie duty zones.”

“We haven’t made a request from Turkish Armed Forces concerning an aid. I only assigned the gendarmerie – a law enforcement force under my command. Gendarmerie continues its duties in some districts.”

“They will face the consequences”

“Those 5 unions never have organize legal protests, which one shall we allow?”

“Where have you ever seen a protest and demonstration right with the violation of main roads and squares in a way that would disturbing the public order and block the flow of daily life? Can this ever happen? ‘I will come to Kızılay (downtown Ankara) and protest from dawn to dusk.’ Is it possible?”

“Using of rights is not the violation of others. There is no sustainability in that. I am calling all workers not to collaborate this appeal, or they will face its consequences.”

“We are currently working on regulations on social media websites within our police forces.”

“We are working on a series of regulations for Facebook and Twitter against those who provoke the public, manipulate people with fake news, or forwards individuals to social turmoils and incidents jeopardizing property and human security.”

“We have had a similar work in Izmir. Now this will spread to other cities. Certainly, we also think that a regulation is needed as well. Justice Ministry will do that.”

“We believe that a regulation is required. We have seen how fake news spread across people. Our operations will resume.” (AS/BM)