Late one night last summer, at the height of antigovernment demonstrations sweeping Turkey, a group of protest leaders rushed to the home of Prime Minister Recep Tayyip Erdogan in Ankara, the capital, to negotiate a solution to the growing crisis.They came away with a tentative agreement, but it was never accepted by the rank-and-file protesters, and so the movement was later crushed by the water cannons and tear gas of Mr. Erdogan’s police force. 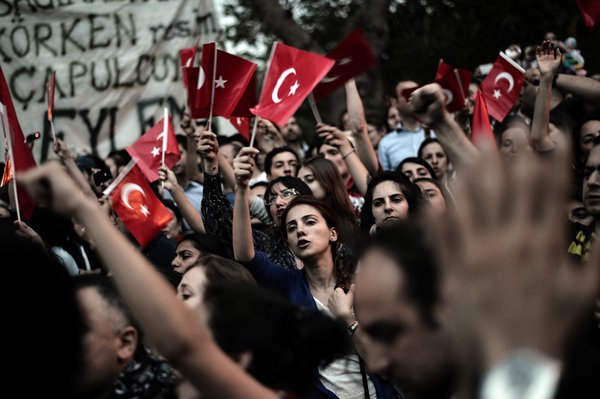 Then last month, one of those leaders, Eyup Muhcu, was summoned by a local prosecutor and interrogated as part of a spreading investigation of those who led the protests. “There is no concrete charge, yet we were called in to give official statements,” said Mr. Muhcu, an architect and a member of the Taksim Solidarity Platform, a group of activists that played a central role in the demonstrations.

For the government, the answer seems clear, Mr. Muhcu said: to silence the opposition.

“It has come to a point where members can’t even tweet without fear of being investigated for their thoughts,” said Mr. Muhcu, one of the few activists still willing to offer a public critique of the government.

As the memory begins to fade of those sweeping protests, which began to save Gezi Park in central Istanbul from being razed and became the most serious challenge to Mr. Erdogan’s decade in power, the government has moved aggressively against its perceived adversaries. More than a thousand students, teachers, doctors and activists — even mosque imams — have been hauled in for questioning for their role in the civic unrest.

Dozens of journalists have lost their jobs for reporting on the demonstrations, and one of Turkey’s wealthiest families now has an army of tax inspectors digging through its accounts, apparently for giving refuge in a fancy hotel it owns to demonstrators escaping clouds of tear gas last summer.

But in a country with a long history of military coups, police brutality, torture and disappearances, many Turks and outside experts said they were actually expecting a more brutal crackdown after the protests. They note that while many people have been questioned for their participation, comparatively few have been charged with crimes, although a prosecutor in Ankara has threatened to charge nearly 500 people in a single court case.

“It is not a witch hunt, but definitely the government has tightened the screws,” said Saban Kardas, a professor at the University of Economics and Technology in Ankara. “It’s a preventive move, so these protests don’t happen again.”

The government, it seems, has mounted a delicate balancing act, analysts say: crack down just hard enough to keep critics of the government off the streets, especially as Turkey prepares for three elections over the next 18 months, but not so hard that Turkey’s international image is further damaged, especially in financial circles crucial to sustaining the economy.

Turkey has also been chastened by the failure of its Middle East policy, once seen as a reorientation away from the West toward the Arab world, and has recently restarted long-stalled negotiations to join the European Union.

“This is Turkey, a candidate for the E.U. and a NATO member,” said Ozgur Unluhisarcikli, the head of the Ankara office for the German Marshall Fund of the United States, a research organization. “Some things that may be normal in Belarus won’t be acceptable here.” Still, he added, “What is happening in Turkey is not suitable for a civilized, democratic country.”

Turkey’s secular opposition, the Republican People’s Party, recently circulated a document titled, “Turkish government’s retaliation to Gezi,” in which it equated Mr. Erdogan to Machiavelli, and wrote, “the one-man government has initiated a ruthless campaign for retaliation against the persons involved in the Gezi movement.” Inside is a list of 77 journalists who were either fired or forced to resign, including Yavuz Baydar, who had been the ombudsman for the pro-government newspaper Sabah.

After being fired for criticizing his newspaper’s coverage of the protests, Mr. Baydar wrote in The Guardian, “the country’s journalists are enslaved in newsrooms run by greedy and ruthless media proprietors, whose economic interests make them submissive to Erdogan.”

While the greatest political consequence of the protests may be that Mr. Erdogan has, for now, been forced to abandon plans to establish a more powerful presidency — which he would run for in an election next year — then analysts say the greatest impact on the culture has been an even greater intolerance by the authorities for dissent, and a coarsening of the political discourse.

Some critics and analysts say they have seen something more sinister: a rise in anti-Semitism, in a country with strained relations with Israel. In his fiery speeches during the protests, Mr. Erdogan blamed an assortment of foreign actors for the unrest, including the “interest rate lobby” — what many regarded as code for Jews — and “Zionists.” Some of Turkey’s Jews, a community of roughly 15,000, are emigrating because, according to a recent report in an English-language Turkish newspaper, Hurriyet Daily News, of “anti-Semitism, triggered by harsh statements from the Turkish government.”

Steven A. Cook, a fellow at the Council on Foreign Relations and a longtime commentator on Turkish affairs, recently wrote, “Turkish political discourse is darker and the attacks on foreign observers of Turkish politics have become relentless.”