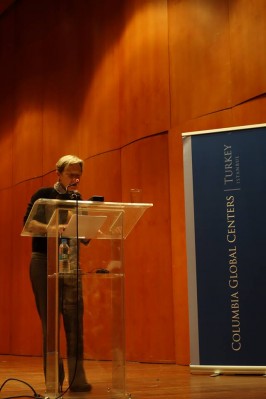 About the Talk
The freedom of assembly is a basic right, but how is it to be understood? How is the freedom of assembly related to the freedom of expression? The right of assembly cannot be asserted by a single person, so how do we understand the plurality that makes that claim? It seems that “the people” assert the right of assembly, but who decides who “the people” are?  And how do actual assemblies change our idea of what it means to assert a right?  Rights are not only asserted vocally, but also enacted with movement, stillness, gesture, and silence. Indeed, there can be no freedom of assembly without bodily enactments, including speech. Consequently, we have to rethink the bodily forms in which this right is enacted. And though modes of assembly and solidarity are at once embodied and virtual, the very idea of assembly presupposes that bodies act together. What kind of right is that which is enacted bodily, and who are the people who enact this right? Are these “the people”?