Gezi witnessing continues with Volkan who runs a stationery store. 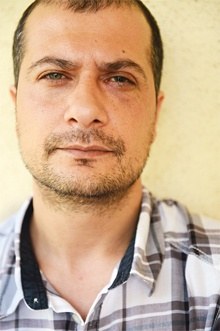 He came to Taksim to protest against the police violence on the first day of Gezi and to support the young people.

During the rioting there he was shot in the eye by a bullet fired by the police.

He was operated on twice.

During the second operation, his eye was cleared of metal beads.

Part of the eye was removed, however, the other part was left untouched as it’s close to his brain.

The police, who state that only plastic bullets were fired, must explain how these metal pieces made their way into Volkan’s eye.

What happened to you at Gezi?
- I lost an eye at a police intervention.

Can you tell how did that happened?
- I’m a tradesman. I run a stationery store in Merter. I was following the events on social media. I’d never been to Gezi. I have to be at the store all day. On 31 May, Lobne Allami was shot. I was really moved by that incident, so sad. Usually I close the store at around 9 pm but I couldn’t stay on that day so I left around 6 pm and went to Taksim. I wanted to stand beside the resisters, it was totally a humane drive.

Were you alone?
- My brother and friends went there earlier, I met them on İstiklal Street.

PAIN ON MY FACE

What was going on at Taksim when you got there?
- The police were holding people at Gezi in a blockade and continuously firing tear gas. Thousands of people, just like us, were kept at bay and were not allowed into the square. We protested on İstiklal street until midnight. Then we went down to Tarlabaşı. There were still protests there. At around 12 am somewhere near the square in a moment of uproar, I suddenly felt a pain in my face. As they were firing tear gas, at first I thought that I had been shot by a gas cartridge.

Were you wearing any goggles or a mask ?
- No. It was the early days of the resistance. I was not prepared. And our aim was not to clash but give support to Gezi.

Can you tell exactly how you were shot?
- From the barricades an armoured police vehicle was coming towards us. People said that if the vehicle was black it would have been from the ‘Anti-terrorism’ office. I didn’t know about such details. It was like a scene from a horror movie. It was all dark, the street lights were off; they were projecting the vehicle’s head lights on our faces. It was exactly the moment when I felt the pain. When I touched my face I noticed the blood on my face…

How aware would someone be about what was going on at that moment?
- I just understood that I had been shot. I didn’t notice that it was in my eye. There was so much blood that at first I thought that I’d completely lost part of my face. My only thought was not to collapse. If I had fallen down then I thought it would be over, no one could save me. I cannot describe the intensity of the police violence. I was still bleeding, ‘I don’t have much time left, I mustn’t pass out here’ I said to myself and asked for help.

Who did you ask help from? Was your brother near you?
- No. Everybody ran away in the heat of the moment. People I didn’t know held me by my arms and took me to a quiet and safe spot. From their reactions I realized that my face was really bad. Then I noticed that I didn’t have sight in one of my eyes. They called my brother on the phone and then he came to where we were waiting.

Did you go to the hospital?
- Emergency treatment was done by volunteer doctors in a hotel at Tarlabaşı. They said, “It’s a serious injury, just go to Taksim Emergency Hospital immediately”. But it was not possible at all! It took us 45 min. to get to Taksim Emergency Hospital which was two blocks away because the police had blocked all the streets. The bleeding was heavy and the dressing on the wound was not helping. Probably because I looked so bad, a taxi driver didn’t want to take us, we had to force our way into his car.

What crossed your mind at that moment? Were you asking, “Why did I come here”? Any feelings of regret?
-No, never! Not at that moment, nor any other time until now did I ask, ‘What was I doing there.’ I don’t regret. Actually I would have regrets if I hadn’t gone to Taksim to support those young people. But only this thought crossed my mind: I have a 3-year old son. “Will I be able to see him again”. And following that I thought: “Let’s say I survived, would he be scared to look at my face because of this horrible scar?”

And then?
- We managed to get to the Taksim Emergency Hospital. On my face and eye there were many cuts so they were sutured. An x-ray was taken. They said “There is an object inside, we cannot tell what it is. It needs to be operated on but that’s not possible here.”

Why?
- Because of this foreign body, an ophtalmologist, an otolaryngologist and a brain surgeon should attend the operation. And this could only be possible at a general hospital. They said, “Go to such a hospital at once and have the operation .” So we started our search for such a hospital.

What do you mean?
- Honestly. One doesn’t know before experiencing it. In a metropolitan city like İstanbul, it’s not easy to find such a hospital; neither amongst public hospitals nor commercial hospitals. And eye hospitals wouldn’t do such operations at night time. We asked the Medical Doctors Association of Turkey, friends and relatives. We asked for an ambulance but it didn’t show up either. Finally we decided to go to Çapa Hospital by our own means. Can you imagine, I need to have an operation but I am traveling in taxi cabs…

Police said, “We didn’t use anything else other than plastic bullets”

What are these beads which were taken out my eye then?

What did they say at Çapa?
- That it wasn’t possible to do such an operation before morning. The telephone calls started again. This time we went to Okmeydanı Hospital. Some tests were made and x-rays were taken as if I were going to have an operation. It was already morning by then. While I was lying on my back, keeping my eyes closed because of the pain, someone stood beside me and said, ‘Get well soon. Did this happen at Gezi?’ I could hardly open my eye, he was the guard at the hospital. He seemed to have a compassionate attitude. He had a look at the documents, x-rays etc. and said, ‘Let me show this to a professor here’. Then I just realized what was going on and I called my brother to see if the document he took was the legal report. When they said yes, I said, ‘Find that guard!’ Because the ER doctor at Okmeydanı Hospital issued a report saying, ‘The patient has a risk of death.’ I think this has caused a problem. When they found the guard, he was with a civil police chief officer. This officer was questioning the ER chief and other doctors about their reasons for issuing such a report. Probably they were trying to make the report disappear but fortunately we managed to get the report back. Perhaps in a second report they would force the doctors not to give a ‘death risk’ report…

What happened next?
- Since the physical conditions at Okmeydanı Hospital were not good enough we went back to Çapa. They examined me at the eye clinic but they said that they wouldn’t be able to attend as they wished to because there was a serious edema and bleeding so that they couldn’t see the back of the eye. ‘We have to wait,’ they said.

How were you feeling at that moment?
- Terrible. The left hand side of my head was in pain as if being pressed in a mill or all of my teeth were being pulled. I was in such a pain and so completely exhausted that I just wanted to go to sleep. But my friends were trying to keep me awake. Since I’d taken a hit to my brain they suspected there might be a trauma. After a while they took me in for an operation.

Result?
- They diagnosed that the sight center of the eye was severely damaged and due to a hemorrhage there was a retina dissociation. My eye was at risk of dissolving. So they sort of pumped in nitrogen gas and told the ear, nose and throat specialist to not attempt to remove the foreign bodies. I had to lie down flat on my face for about two weeks, with all those foreign bodies in my eye…

What has your eye got to do with ear, nose and throat?
- Because the bullet entered through my eye and on its way towards my brain struck my nasal bone shattering it into pieces and those pieces entered into my sinus cavity. Ophtalmologists couldn’t see that area. Then they took x-rays and detected that the foreign body was indeed metal beads. Some of them were pretty close to the brain; they were located in a risky spot. They didn’t attempt to take them out. The others are all removed…

How many beads did they take out?
- The case has been removed but there were hundreds of metal beads. I don’t know the number. Some of those in the sinus cavity have been removed but not all of them…

So sorry, this is really bad! But weren’t the police using only plastic bullets?
-Yes, that was what they were saying. The Police said, “We didn’t use anything else other than plastic bullets; we don’t even have anything of that sort in our inventory”. Then how about the things they removed from my eye! These beads are the evidence of the police using stuff which shouldn’t be used in controling the riots. This is not something to be used for marking the protestors with paint guns or for a deterrent effect. Its aim is to injure or even kill people! It resembles paintball bullets but it has hundreds of metal beads inside. I call it a modernized dum-dum bullet. They don’t have the authority nor the right to use such weapons. Who else, if not I, would call them to account for having done this!

How does the legal process go?
- We filed a criminal complaint at the prosecutor’s office. We put the metal beads into that file as well. We took them to the court and had them registered. They will be used as evidence. I will look for justice until the end..

Will you ever be able to see again?
- Unfortunately, I’ve completely lost my left eye.