Turkey’s Gezi Park protests have clearly reflected the distance between the priorities of the Turkish people and the Turkish government, Socialist International (SI) Secretary-General Luis Ayala has said ahead of the group’s summit in Istanbul, which will begin with a special session on Gezi. 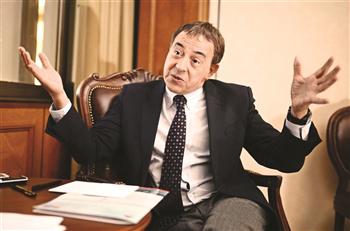 Socialist International head Luis Ayala says the Gezi protests that swept Turkey in June were part of a wave that encompassed countries around the world.

We are very interested in listening and learning more of the Gezi Park protests. That’s why there will be a special session at the opening of the meeting on Monday where we are going to listen to some of the actors and peoples who participated in demonstrations,” Ayala told the Hürriyet Daily News in an exclusive interview on Nov. 9.

The special session will feature civil society organizations who will make a presentation about the protests today. The SI summit will run today and tomorrow.

“We saw that here in Gezi Park, the situation in Istanbul reflects the distance between what people see and consider fundamental and the opposite agendas of the government. There has been a deficit between priorities of citizens and government. We believe strongly that there’s a big deficit of democracy when a government is moving in an agenda that goes in the opposite direction of what citizens believe are the fundamentals,” Ayala said.

“The struggles of the people in Gezi Park … are common today in many parts of the world. Because people feel powerless when governments do not listen to them, when political institutions do not respond to their concerns, when the agendas are being shaped somewhere else, not on the basis of the peoples’ expectations. And people take to the streets and mobilize themselves. We socialists welcome it very much,” Ayala said.

On the first day of the meeting, two panels on the topics of “Current crises related to the struggles for democracy, particularly in the Middle East and North Africa, and conflicts threatening peace and security,” and “Reaffirming the center-left vision for the global economy with an emphasis on growth, jobs and equality, and for a new development agenda” will be held.

“We have come to this part of the world, to this region where important battles for democracy and rights are being fought,” Ayala said.

Recalling that the SI expressed its worries during the protests and called on the Turkish government to act accordingly with fundamental democratic requirements, Ayala said they were very shocked at the use of violence “not only by the security forces but also by some political forces opposing those who were in the park.”

People in many parts of the world, from Brazil to Spain, have recently mobilized for more freedom, and the Gezi protests was also a part of that struggle for more freedom, according to Ayala. “They mobilize for more rights, more equality. And no government should exclude anybody; they should provide all the rights for all the people. No other formula in the 21st century is possible. So we look Turkey the same way. There’s a challenge here that you need to secure democracy, freedom from every angle. And when this is not the case, we got concerned as happened in Gezi Park,” he said.

Criticism to coup-backers in Egypt

“People demanded democracy [in 2011]; Tahrir Square became a symbol for people’s demand for democracy. That process led to an election of a president and unfortunately, a democratically elected president imposed a Constitution on the other part of Egyptian society. In turn, the other part supported a military takeover. That’s also wrong,” Ayala said.