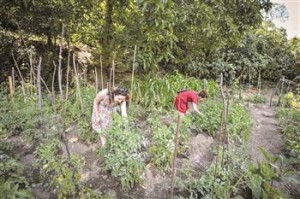 Kuzguncuk residents launched a campaign against construction at a vegetable garden in the neighborhood. The 3rd Preservation Board declared in 1998 that they were against a school project there but later changed its decision. DAILY NEWS photo, Emrah GÜREL

The residents of Istanbul’s Kuzguncuk neighborhood are campaigning against the zoning of a historical vegetable garden, which they allege will be turned into a private school.

Reports that the General Directorate for Foundations (VGM) would rent a 6,000-square-meter area of the 16,000-square-meter vegetable garden to a company to build a private school have stirred the residents of Kuzguncuk. Ayfer Fatma Çelik, a board member of the neighborhood association of Kuzguncuk, told the Hürriyet Daily News that officers of a private company recently made expeditions for the construction of a school in the vegetable garden, located at the heart of the neighborhood.

“The construction of a private school came up in 2011, and we voiced our reaction back then too. We opened a trial this past May,” said Çelik. The vegetable garden, which is claimed to have been owned by two Turkish citizens of Greek origin, was confiscated by VGM in 1966 when both of the alleged owners were alive.

According to a statement made by the officials of the press office of VGM, the garden was owned by the VGM and expropriation was “beside the point.”

The officials added that work regarding the vegetable garden was ongoing but refused to give further details. Çelik said VGM had barb-wired the garden a few years ago to “protect” the land, which Çelik claimed alienated the residents from the garden. The garden was agricultural land, Çelik said, adding it could have been damaged as it had not been cultivated for a long time.

‘No need for restructuring’

Aslı Aygün Öztürk, another board member of the association, told the Daily News that there was already a public school in the neighborhood, which met locals’ schooling needs.

“The school that is going to be constructed here is surely not for the children of Kuzguncuk, it will be built to get unearned income,” said Öztürk, adding that they would struggle together to preserve their city.

According to the members of the association, the Chamber of Architects made an evaluation in 1992 that the vegetable garden was an “urban space that did not need structuring.” Istanbul’s 3rd Preservation Board declared in 1998 that they were against the projects submitted for the garden, which is also a protected area, but later in the same year changed its decision, ruling that educational projects could be submitted.

Çelik said the trial they had opened against this ruling had ended in their favor. “The school project is waiting on the resolution of the Commission on the Preservation of the Environment, which operates under the scope of the Environment and Urban Planning Ministry,” said Çelik.

Commenting on the ethnic characteristic of Kuzguncuk, Çelik said Greeks, Armenians and Jews of Turkish nationality resided in the neighborhood before the tensions between Turkey and Greece that resulted in the Cyprus Peace Operation of 1974, when they migrated.

Çelik said not only the vegetable garden but also the houses of the minorities who once resided in Kuzguncuk had been confiscated.