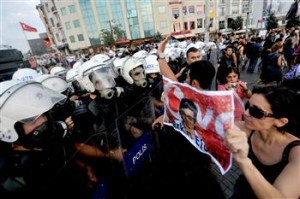 A protester shows a poster of the 14-year-old Berkin Elvan, who has been fighting for life since June 15, as Turkish riot policemen try to disperse demonstrators gathered on the juncture of Istanbul’s Taksim Square and İstiklal Avenue. AFP photo

ISTANBUL - Police fired water cannons and tear gas at a group of demonstrators who gathered in Taksim Square to protest the violence used against a 14-year-old teenager who has been in intensive care for 46 days after being hit by a tear gas canister in Istanbul during the Gezi Park unrest.

Berkin Elvan was not a protester but a by-stander who was attacked after stepping out to buy bread during a police intervention in Istanbul’s Okmeydanı neighborhood on June 15.

Hundreds turned out to show their support in a demonstration called by the young protester’s family, seeking justice and action against those officers who fired the gas canister. Opposition Republican People’s Party (CHP) lawmaker Sezgin Tanrıkulu also attended the protest.

Elvan’s condition is critical due to an infection, the family had said in their call for protest.

However, riot police stationed around the Taksim area started to use water cannons after the protesters refused to disperse.

Scuffles occurred when police officers tried to push protesters to the entrance of the pedestrian İstiklal Street. The parents of the injured teenager, Sami and Gülsüm Elvan, who had read a written statement, were trapped inside the crowd. 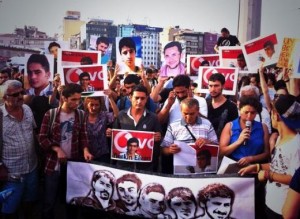 The mother who broke down and cried saying, “I only want my son back,” was laboriously calmed by protesters.

Officers were chasing demonstrators who have escaped into the side streets, daily Hürriyet reported. A protester has been injured and taken to hospital after being hit by an “unidentified object” on the head, the report also said. An officer was also reportedly firing rubber bullets from the top of an armored police vehicle.

Police have not allowed demonstrations in Taksim Square, despite having reopened Gezi Park in the second week of July.