The news of the death of 15-year-old Berkin Elvan after after 269 days in a coma due to head injury in the demonstrations for park Gezi last June in Istanbul, came not as a surprise to us. This undeniably remind us of the murder of 15-year-old Alexandros Grigoropoulos in Athens five years ago, which led to the December uprising. Today his image appears on placards next to that of Berkin. 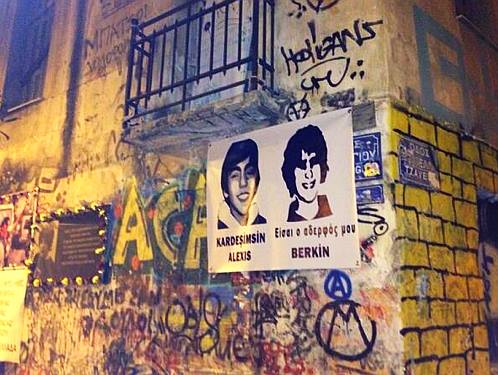 Exarcheia, Athens: the photo of Berkin Elvan in the hot-spot where Alexis Grigoropoulos was shot dead by police fire-arms

Just as Greece, Spain, Portugal and the rest of Europe, Turkey is similarly experiencing the consequences of state brutality accompanied with large scale attacks on democratic freedoms. It is evident that the state and all the mechanisms of repression are gradually becoming more authoritarian across the globe as political power is increasingly concentrated in the hands of a minority, resulting at the same time in the dramatic expansion of brutality, exclusion, inequality and injustice. The arbitrariness of the oligarchic governments against our fundamental rights is not anymore an illusion or a fantasy but an obvious reality. Peaceful demonstrations are constantly attacked by heavily armed police forces; Greece and Turkey are only two examples, as we have witnessed brutal repression in Spain, Britain, Brazil. Almost all across the world where people are fighting aiming to maintain their hard-earned freedoms, the current institutions that exercise arbitrary power respond with force and coercion. At the same time, the world of media remains largely indifferent, dismissive or one-sided. Therefore:

It is undeniable that hysterical nationalistic populism and geopolitical rivalry between us has fed hatred and tensions for centuries. We know that speculative arms dealers motivated by self-interest will continue to cultivate and breed hatred between the two peoples (Turks and Greeks) that have so much in common. We acknowledge that demagogues, hate preachers, historians of parody and propagandists have for years attempted to convince us we are nothing but enemies, having nothing in common except the sword. That we should be always available to give our lives in the “upcoming war against our bad neighbours” looking for the revival of past glories. Our judgement is not driven anymore by friendliness but by ignorance. Hatred against each other has conquered our minds. It is time, nonetheless, for all democratic citizens of both countries who reject every form of hubristic nationalism or religious isolationism to combat these challenges. All of us who aim to eliminate the use of structural violence and instead create autonomous and democratic societies need to go down on the offensive and thoroughly expose the vulgarity of national populistic ideologies in such a critical moment where the ordinary citizen – either Turkish or Greek – experiences the same intimidation, impoverishment and humiliation.

In order to counter this bleak situation we must engage in collective action, through a joint internationalist revolutionary network. It’s time to hold decisive actions together. In the squares and streets real democracy, human creation, and communication may be reborn.