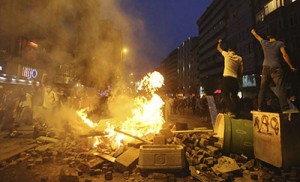 Journalists were attacked, detained, and obstructed while reporting on clashes between police and protesters on Sunday. (Reuters/Serkan Senturk)

Istanbul, June 17, 2013–Anti-press violence intensified in Istanbul on Sunday as police aggressively sought to obstruct reporters covering demonstrations against the government, according to news reports and CPJ interviews. The Committee to Protect Journalists calls on authorities to halt their harassment of the press.

“The heart of Turkey has become an epicenter of official violence and obstruction of the press,” CPJ Europe and Central Asia Program Coordinator Nina Ognianova said. “If the government of Prime Minister Erdogan is genuine about its democratic commitments, it must allow journalists–both foreign and domestic–to report freely on the ongoing news events in the country.”

Police on Sunday beat and detained Gökhan Biçici, an editor with IMC TV, near Taksim Square, according to news reports. He has not been released.

Police also on Sunday beat freelance journalists Eylem Düzyol and Fulya Atalay in an apartment building in Şişli District where they had sought shelter from the effects of tear gas, the journalists told CPJ. They had been photographing the dispersal of anti-government protests, they said. Düzyol and Atalay told CPJ they were beaten even though they had identified themselves as journalists. They did not report serious injuries.

The same day, police briefly detained three journalists–Uğur Can, reporter for Doğan News Agency; Serhat Uludağlar, reporter for the daily Akşam; and Okan Altunkara, reporter for IMC TV–saying they did not possess state-issued press cards, according to news reports.

Ahmet Kaan Sağanak, reporter for the daily Cumhuriyet, told CPJ that police on Sunday forced him to delete a photo he had taken of police clashes with protesters in the Harbiye district of Istanbul. Another journalist, Kenan Butakın, correspondent for the daily Vatan, said that police had bullied him into deleting photos he had taken of a police officer detaining a protester.

International journalists have also come under fire while covering the clashes. On Sunday, prominent Bulgarian reporter Elena Yoncheva was hit by a tear gas canister and suffered slight injuries, news reports said. Yoncheva was covering clashes between police and protesters in Taksim for TV7. Arkady Babchenko, a Russian freelance journalist, was beaten by police and detained for 24 hours on Friday in connection with his coverage of clashes around Gezi Park.

Journalists including correspondents with Hürriyet Daily News, Ulusal Kanal TV, and the daily Akşam have reported being attacked by police and protesters while covering the dispersal of protests in Taksim Square and Gezi Park on Sunday.