The Aesthetics of Resistance 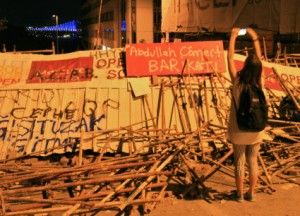 1.Stars shine better in utmost darkness. Stars are shining everywhere against the darkness of this country.
2.Homeless teenagers living in the Taksim area have been asking how long the resistance is going to last, because apparently they’re treated to meals thanks to the communal life of the protesters there. The same government that makes a fuss over alcohol consumption within 100 metres of mosques has no qualms about people with empty stomachs within 100-metre radius of mosques.
3.Historical events are etched in memories with their outstanding features. The life that took shape in Taksim in two weeks has sowed the seeds of Utopia in this country.
4.Everyone is enjoying the camaraderie and freedom. No one is being patronizing and everybody is wearing their colours of life free of restraint. While the Anticapitalist Muslims perform their prayers, atheists keep watch around them. The Kurds dance their halay, Alevis whirl in their ritual dance, semah, Turks chant marches. Socialists, LGBTs, fans of Beşiktaş, Fenerbahçe and Galatasaray teams roll up their sleeves together, have fun together and keep an eye on each other. Everyone’s freedom is guarded by everyone else.
5.No one is in need, everyone is equal. People donate what “they don’t need” and everyone takes what “they need.” No money, no ownership, no hungry people.
6.At Gezi Park, we’re experimenting with statelessness. Witnessing the happy and civil state of affairs in this enclave is a blessing.
7.For the first time in our history, humour and joy have become the language of resistance. While dissident groups have always resisted through sheer force and to the death, now we express ourselves with the light and witty language that goes beyond sour words.
8.The state may defeat hardliner rebels. But there are no tools available to the holders of political power to defeat humour and joy. That is why theirs is a hopeless case. They’re not fooling anyone.
9.The Paris Commune lasted for seventy two days. With enthusiasm, we brought to life the same principles in two weeks. When the Commune was violently destroyed, liberals and bourgeois intellectuals were discussing the inconsistencies, weaknesses and faults of the Commune. Marx, in protest, pointed out the potentials for the future: ownership and exploitation were done away with and direct democracy was given a chance.
10.Sheikh Bedreddin’s legacy for us is twofold. For one thing, he joined the popular uprising. Secondly, he believed in equality and sharing. Thomas More’s Utopia and Ibn Tufail’s Hayy ibn Yaqdhan inhabited the same dream world. And we’re living that dream as well.
11.We’re pointing at a good example: Look, what we’re doing is good. But the government and its trumpeters prefer to see our pointing fingers instead and are desperate to badmouth us. They intend to undermine the movement by setting us against each other. We won’t give up: look at the direction where we’re pointing. You’ll see the trees and the sea there.
12.We love the red of revolution; we strive to save the green. The same people who have written this message across walls have named a bus stop “Stop to Contemplate the Sky,” in a salute to dead poets.
13.We’re grateful to these young people; they dashed in when things looked really grim and saved humanity on the precipice. Those who think them selfish and ignorant are mistaken. As the protesters named each of the eleven barricades set up in Gümüşsuyu, they spelt the name of Abdullah Cömert, who passed away last week, on one of them. And later, on the last barricade that overlooks the sea, they wrote, in a noble act, the name of the late revolutionary Deniz Gezmiş in giant letters.
14.People are nothing on their own, but they mean everything when they band together. If we don’t get what we want, the interest lobby is going to turn our city – and our life – into a desert. For them, history is merely “pottery” or it is good for nothing but revenue; they worship money and nothing else.
15.They want us to dry up without trees and water like those innocents in Karbala. We know that they shed tears for Karbala while eating from the same table as Yazid. That is why we celebrate water and trees before the desert and life before death.
16.They go on and on about vandalism. The destruction of Gezi Park, doesn’t that count as vandalizing? We claim public property in the most peaceful manner and we repeat: Do not damage public property!
17.What is at stake here is not only opposing an idea but also demanding something else. Solidarity and cooperation bring about companionship. With this high-octane energy, the country made gains beyond the measure of any stock index. This alone should suffice to declare the area a site.
18.People are not customers. We need to sustain what we’ve achieved to keep this relevant. We could hold Fraternity and Solidarity festivals every year on 31st May. A festivity of freedom where everyone participates in their own colour; a world of equality where money is obsolete. Everyone brings in what “they don’t need” and everyone takes away “what they need.” This is what people long for, in order to counteract the fear of big money.
19.A poet reminds us that the dead need to be counted in the population of Istanbul. To honour the beautiful dead, we must ensure the city is protected for those who will live here in the future.
20.Youngsters have put it very aptly in graffiti: “Even if we lose, we’ll have the sweet aftertaste of revolt.”
21.We’ve learned a lot, we’ve translated all our past resistance and dreams into a new language. We have written our past on a clean slate.
22.Hope, dream, utopia! And revolt! Like a poem a youth reads out loud in the square: “With you, we rewrote all of our love stories on a clean slate.”

Translated from Turkish by Duygu Tekgül for Solidarity Park Poetry.