The country’s east and west are both resisting. “Long live the brotherhood of people” chants are echoing everywhere. It was a mistake to expect those in power to bring about peace, so now the people are taking over the process. 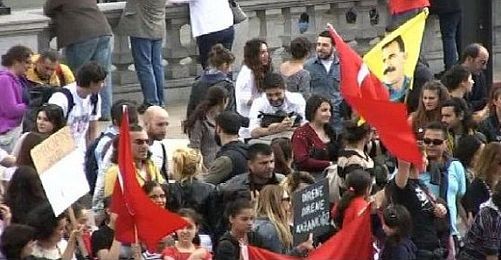 We enter Taksim with slogans, folk songs, people bumping into each other and apologizing, chanting “Come, come, come!” and the dense smell of tear gas in the air. The issue is not a couple of trees anymore. We are the kids who challenge the authoritarian father. Turkish, Kurdish, Armenian, Alaouite, gay, lesbian, atheist… In this homeland, we are maybe the first ones to stand shoulder to shoulder against fascism. We are many, we are in the right and we are definitely going to succeed!

For days, it was said that the protests didn’t have support from the Kurds and that Kurdish people stood aloof due to the continuation of the peace process. For some reason, the mainstream media that preferred to broadcast a penguin documentary instead of the police brutality, happened to not skip over only this piece of news. At the same time, it is not as if we aren’t a little anxious over the possibility of an unpleasant incident sparking every time we the see the nationalists. But at that very point, fireworks lights up the sky in Taksim Square. My friend’s eyes and mine meet and we smile; they are here!

After a while, the very Gezi Park that was going to be replaced by military barracks turns into an autonomous region. We have tents, an infirmary, ateliers, a vegetable garden, and even a “Revolution Market”.

On the one hand, bagpipe tunes are playing, while on the other hand, people are dancing the halay along with slogans like, “Riot police don’t stand idly by, bring the Kurds some tea.” We

cut off the, “We are the soldiers of Mustafa Kemal” slogan by shouting another slogan: “We are not going to kill, not going to get killed. We won’t be anyone’s soldiers.” Then we shout in unison: “This is only the beginning, the struggle will go on!”

They, of course, can’t bear it and come up with the excuse of, “We are going to take down the 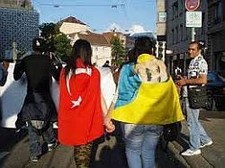 banners” in order to intervene at Taksim. The youth that took to the streets for the first time in their lives and were declared terrorists, once they found themselves in the opposition, also meet the government reflex. Assessing the situation at hand, a whole generation that has been watchingon the TV the incidents taking place in the eastern part of Turkey, came to realize that the Kurds are not really those people shown on the news under captions like “captured dead”, “shot due to bullets fired into the air” or “people fooled by foreign powers.” Meanwhile, a thread starts on Eksi Sozluk (a website similar to Urban Dictionary)under the title “I apologize to you my Kurdish brother and sister.” Another dictionary writer states, “From now on, whenever there is an event in Izmir, I will protest with my Kurdish siblings at the very front as a Turk.” Apologies and self-criticisms follow one after the other.

We post everything we see and know on this “menace” called twitter. We stand shoulder to shoulder with those who take to the streets and join in solidarity through the Internet with those fighting in other cities. On the day of the opening of Gezi Park to the “public”, a message came up in my twitter account: I wish this arm of mine that can’t reach Istanbul from Diyarbakir would fall off. I’m going nuts here. Please tell me if there is anything I can do from here. Our hearts are with you.” We hug this friend of mine that I have never met. Just when I’m about to give into hopelessness, this message gives me power and says, “Serkeftin! (Good luck in Kurdish)”.

Meanwhile, on June 28th, soldiers open fire on the residents of the village of Kayacik in the Lice district of Diyarbakir, who were protesting against the construction of a military police facility. Due to the “warning shots fired into the air”, Medeni Yildirim, who was 19 years old, dies. We feel heartsick. Kadıköy, Taksim, Beşiktaş, İzmir, Ankara, Antakya, Mersin, Eskişehir and many more. They all take to the streets for Medeni. A friend of mine calls me from Izmir as I am walking in the crowd at Besiktas. He says, “We are walking with a group of 100 people. I am chanting slogans not even knowing what I am saying.” The country’s east and west are both resisting. “Long live the brotherhood of people” chants are echoing everywhere. It was a mistake to expect those in power to bring peace, so now the people are taking over the process. We met

at Gezi. We are beginning to trust each other at Lice.. Meanwhile, a tweet that falls to my timeline summarizes what the Gezi spirit is: