Various soccer fan group members spoke up against government’s latest plans to ban political cheering in stadiums across Turkey. Considering the measures as an extension of AKP government’s ban mentality, Tek Yumruk and Sol Açık groups predict that soccer fans are very likely to use humor in the days to come.

Tek Yumruk and Sol Açık, prominent fan groups from Galatasaray and Fenerbahçe Soccer clubs respectively, said they contested the bans which they predicted will be violated through new methods.

Sol Açık: Fans will use their “unbalanced” intelligence 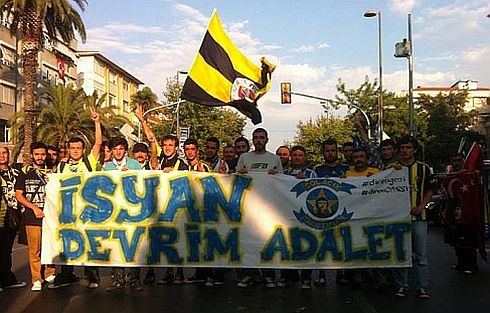 “By saying that they are going to ban political cheering in stadiums, the interior minister is actually demonstrating how politicians are trying to dominate soccer and sports in general. The aim here is to oppress all sorts of dissident voices against the government and its ruling elite.”

“Lately Trabzonspor president publicly declared how much he favored PM. Galatasaray president also claimed that at least 20 million out 25 million Galatasaray fans must have voted AKP in elections. On the other hand, some fans groups cheered chants like ‘Keep your head up, your brothers are with you’. For some reason, these statements are not considered as political. They are campaigning to silence dissident voices. Don’t you remember what they did in Mediterranean Games? They didn’t sell any tickets to the public. Instead they only allocated tickets to their supporters. Is this not political either?”

“We hope to see sports as the most naive game ever. This is exactly how we stand in stadiums. But this doesn’t mean that we are going to give up on our beliefs and opinions. We shouldn’t forget that soccer fans don’t only live in the stadium and get inspired there. On the contrary, they are a part of this society as well. As Sol Açık, we will keep on expressing our dislikes, likes, criticism in stadiums like we do in every part of life. Minister Güler said he doesn’t wish to see politics in stadiums. Well, we don’t want to see profit-seeking in stadiums.”

“By the way, politicians are only trying to frighten the fans by these bans and penalties. These are political games planned by those who don’t want to see politics in stadiums. I believe that soccer fan groups will use their ‘unbalanced intelligence’ [a term coined during Gezi Resistance to protest through humor] and they will find their way around bans.”

“Every obstacle will create its own solution.”

Tek Yumruk: At worst, we would cheer “Long live Sultan” 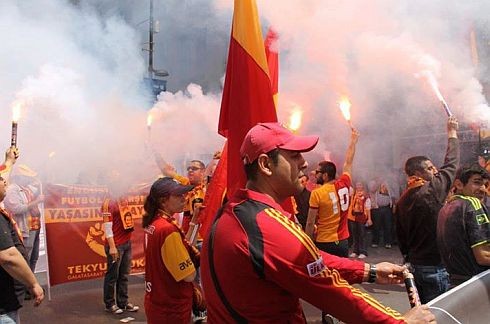 “It wasn’t an abstract response when we took part in Gezi Resistance. It wasn’t only about saving trees for sure. During the protests, we also fired our torches to protest the pressures on us to become ‘responsible supporters’ in the name of preventing violence in the stadiums. Those torches were to confront the authorities who don’t want to see ‘spectators’. Those were the torches of rebellion. Now they are issuing a banner ban on the upcoming Super Cup Final in Kayseri. This is a sign that the massage through the smoke of Gezi Resistance reached its destination.”

“They are issuing new bans for the new season. Of course, we don’t accept that. For us, every game is an opportunity to turn the stadium into a carnival with our drums and songs and banners. We go to stadiums to support our team. And we also show our color towards current evens in the country.”

“Everybody must know that soccer fan groups don’t seek to do politics in the stadiums. This is only about expressing our attitude towards certain events. There is nothing beyond that. Moreover, we need to be a homogeneous entity to pursue politics in stadiums – which is not the case. We are a heterogeneous group and we are sure that other fan groups are also similar.”

“Before these bans, there were several limitations as well. But this ban mentality shows that they will issue penalties in case they see something they don’t want to see in stadiums. We don’t know what their criteria will be like. For example, Sports Minister made a statement after Interior Minister and said that current regulation sufficed. We will be more vigilant from now on. But I don’t think fans will submit to these threats. At worst, we would use humor and cheer ‘Long live Sultan’. There are many empires and kings of soccer anyways.”

“We are including political and ideological cheering in the category of illegal demonstrations and behavior against sports morality in the stadiums. This sort of cheering is already banned with international norms. Soccer clubs have already signed to take necessary precautions in the selling of season tickets. Certainly, we will be following this up” Interior Minister Güler said on Wednesday. (EA/BM)