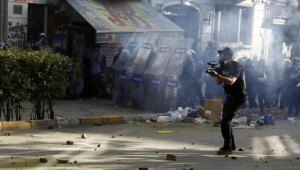 During the Gezi Resistance across Turkey, police violence left 4 protestors dead and 7,882 injured with 59 gravely injured. 71 demonstrators have been arrested for “public property damage”. Advocate Efkan Bolaç informed that no violent perpetrator police officers (except one) have yet to be arrested or prosecuted.

Advocate Efkan Bolaç informed that no violent perpetrator police officers have yet to be arrested or prosecuted – with the unique exception of the policeman who allegedly shot Ethem Sarısülük in Ankara.

Thousands of people have been detained across Turkey during the Gezi Resistance demonstrations and 71 have been arrested for charges related to “public property damage”.

As scores are currently submitting their testimonies under police detention, police authorities have yet to announce any policeman who is facing investigation related to police violence during Gezi Resistance protests.

Addressing at Police Academy Commencement ceremony this morning, PM Recep Tayyip Erdoğan claimed that “police has written a saga within the order of law”.

“Whoever executed an unlawful order is responsible”

Efkan Bolaç, on the other hand, claimed that PM’s remarks on “police saga” reminded him  of a famous of quote of former president Süleyman Demirel, who said “don’t turn the hand of police cold”.

“PM addressed crowds in Erzurum yesterday, saying that he gave the order to the police. With these words, he already pointed out that he had nothing to do with negotiation. He showed his true intentions on why he met the Gezi Park delegations.”

“With this statement, PM actually meant there is no ‘unlawful order’. But as advocates, we are reminding police officers: Whoever executed an unlawful order by a supervisor is also responsible.”

“For example, there are bone fractures in the head of Abdullah Cömert who was killed during the Gezi Resistance. But we don’t even know whether any officer is being prosecuted related to this. Officials made no statement.”

“We will follow up with the excessive police force related prosecutions in Istanbul.”

Turkish Doctors Union (TTB) released a statement, saying that at least 7,822 people were injured and 4 killed on the first 20 days of Gezi Resistance.

According to the statement, while 59 protestors are gravely injured, the health situation of 6 remain critical. Also, 11 protestors lost eyesight due to canister-related injuries.

As of this morning, the distribution of arrested protestors according to cities is as follows: Ankara (22), Adana (1), Kocaeli (2), Istanbul (33) and Izmir (13). 27 detainees in Istanbul are still being questioned by police authorities.

Interior Ministry released a statement, saying that roughly 4,500 people have been detained during Gezi Park protests across Turkey.