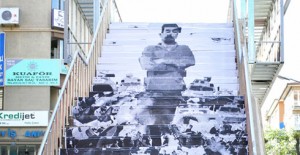 The image of Ethem Sarısülük – a Gezi Park protestor whose brain death occurred in Ankara yesterday – has been placed on the stairs of a pedestrian bridge in Turkey’s capital.

Ankara-dwellers are paying their tributes to Ethem Sarısülük – a Gezi Park protestor whose brain death has been declared yesterday after being reportedly shot by a police officer on the first day of Gezi Park protests in Turkey’s capital.

Last night, thousands of Ankara-dwellers assembled on the steps of Sarısülük’s apartment building in Batıkent neighborhood and shared their grievances with Sarısülük’s family.

This morning, on the other hand, those who were passing by Konur Sokak in downtown Ankara came across with the colossal image of Ethem Sarısülük on the stairs of a pedestrian bridge.

The image was inserted on the stairs and had no content except a magnified image of Sarısülük standing far above an army policemen shooting tear gas bombs and armored vehicles patrolling.

On April 23, the same staircase was used for inserting the image of Erdal Eren – one of the youngest victims of the coup regime of 1980 in Turkey. (EÖ/ÇT/BM)