The demonstrations that broke out across Turkey earlier this year after the police clampdown on an environmentalist protest at Istanbul’s Gezi Park came as a major sociopolitical quake for the country. The first tsunami after the big tremor is beginning to rise as street clashes spread again across Turkey over the Sept. 10 death of a 22-year-old protester in Hatay province. A massive wave of violence could swell and easily engulf Turkey unless the Justice and Development Party (AKP) government recognizes the gravity of the situation and enacts serious measures. 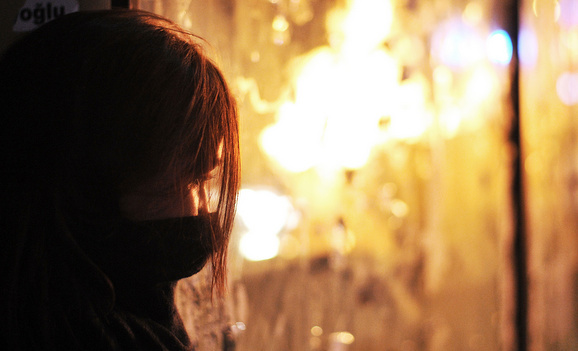 \
A Turkish protester takes cover behind a wall during clashes with riot police in Istanbul, Sept. 10, 2013.

The main factors behind the second wave of protests appear to be distrust of government and state institutions and a widespread conviction that the police enjoy impunity for the crimes they perpetrate.

On Sept. 10, a demonstration in Antakya’s Armutlu district — organized to commemorate the death of Abdullah Comert, who was killed during the Gezi protests — quickly degenerated into clashes between demonstrators and police. A young man, Ahmet Atakan, died. A short video circulating on the Internet shows a man falling to the ground next to a police riot vehicle moving under an intense hail of stones from protesters. According to a statement by the Hatay governor’s office, Atakan died after falling off a roof. Witnesses, however, claim that the young man was first shot in the head with a gas canister fired by police and was then hit by a police vehicle. Convinced the police killed Atakan, protesters took to the streets across Turkey and clashed with the security forces. However, a local TV channel’s footage shows Atakan falling from a multistory building, and his uncle Nevzat Atakan appeared on the channel and said, “We are now convinced that he died of falling from that building.”

The statements of the authorities carry little weight because, during the Gezi protests, similar explanations proved untrue. Take for example the case of 19-year-old Ali Ismail Korkmaz, who was injured in the central Anatolian city of Eskisehir and died in the hospital after fighting for his life for 38 days. The local governor’s initial statement that Korkmaz was injured in a brawl among protesters turned out to be completely false. Security camera footage that emerged later showed clearly that Korkmaz was beaten unconscious by police officers, aided by local residents.

The initial Gezi demonstrations and the protests rekindled by Atakan’s death manifest clearly the extent of the protesters’ distrust of the authorities. When being detained, for instance, the protesters cry out their names so that others can keep records. It is a reflection of their fears that, once taken into custody, they could become victims of a “forced disappearance,” that is, that they could be killed and dumped somewhere. The “forced disappearances” were a widespread practice in Turkey in the 1990s, especially in the predominantly Kurdish southeast. The practice, however, has not been seen during the rule of the AKP, which came to power in 2002. Yet, the fact that some protesters still have such fears illustrates how much the credibility of the authorities has eroded.

The mistrust is being further nourished by the absence of any credible investigation into the widespread police violence and human rights breaches during the Gezi protests.

With Atakan’s demise, the death toll from demonstrations since the Gezi events rose to six, including five protesters and a policeman. The five protesters were all from the Alevi sect. This, along with the fact that the most violent clashes take place in mainly Alevi neighborhoods, is a major sign that violence could further escalate in the coming days. Ismail Saymaz, a correspondent for the Radikal newspaper who has followed closely the Gezi protests and their aftermath, said that police resort to different levels of force in different neighborhoods, and that the toughest clampdowns take place in predominantly Alevi areas.

On the other hand, it could be equally true that Alevi neighborhoods are the areas where the police face the most hostile reactions. Due to their painful history, Alevis have shaped their identity around “victimhood” and represent a community deeply mistrustful of pious Sunnis. Massacres of Alevis in four Turkish provinces in 1978 occupy a special place in their collective identity.

The Alevi sense of insecurity and apprehension appears to have deepened during the AKP rule, mostly over the past several years. Tensions have notably mounted over the government’s persistent reluctance to recognize the Alevi identity and places of worship; its ostracizing rhetoric often employed against Alevis; the naming of the prospective third Bosporus bridge after Selim The Grim, the sultan who has come to symbolize the mass slaughters of Alevis in Ottoman times; and most recently the AKP government’s open support for the Syrian opposition fighting President Bashar al-Assad.

The latest victim of the protests (Atakan), as well as Abdullah Comert, the young man whose killing Atakan was protesting, were both residents of Armutlu, a district in Hatay populated heavily by Alevis. Hatay, for its part, is a province on the Syrian border, where both Syrian refugees and members of the Free Syrian Army fighting Assad take refuge. Hatay’s Alevis, who are of Arab origin, have close kinship, cultural and historical bonds with the Syrian Alawites.

The fact that all five victims are Alevis has further amplified the Alevis’ already acute mistrust, suspicion and anger. Yet, the AKP government blames the unrest on local and foreign forces conspiring to destabilize Turkey, instead of trying to understand the social dynamics that give rise to the protests.

It wouldn’t be a prophecy to say that the protests will continue unabated unless the government takes confidence-building democratization steps to soothe the Alevis and launches a credible, transparent investigation into all deaths and injuries.

The demonstrations will very likely escalate in October after universities reopen. The Kurds have largely shunned the demonstrations so far, wary not to damage the peace process. But if the process stalls and the Kurds join the protest movement, social tension and conflict could shoot up to unpredictable levels.

The Gezi protests originated as a “middle-class” movement. But with Turkey’s fragile social segments joining in, they are now drifting in other directions. Unless the government comes up with drastic new policies and changes its attitude, the likelihood of Turkey drifting into a spiral of violence seems to be quite high.