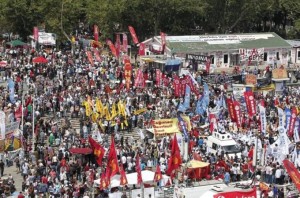 “Quick, we need volunteer doctors in Taksim!” posted one user on Facebook, followed by a thousand shares and people responding with contacts from all over Turkey. Another published a series of phone numbers of lawyers offering free legal help to the detainees. A worried woman wrote: “Please stop posting phone numbers of lawyers, the police is busting them as we speak.”

We are witnessing a new type of political activism in the country, as the recent protests in Turkey have brought together a nation of disgruntled citizens on the internet as well as on the streets. The course of events again demonstrate the undeniable influence of social media in affecting collective behaviour during times of political unrest, recalling the revolutionary events in Tahrir Square two years ago.

Recently, researchers at the University of Washington found that during the Arab Spring social media mobilised the uprisings and raised expectations about its success. “People who shared interest in democracy built extensive social networks and organised political action. Social media became a critical part of the toolkit for greater freedom,” declared leading researcher Philip Howard.

Although much different than the Arab Spring, the recent Turkish uprising is also relying on the internet to spread the word in an unprecedented manner. This time, what gave the Turkish protests their viral effect was the constant use of political humour and the protesters’ willingness and ability to turn every heavy-handed move into an occasion for social media satire.

The Turkish uprising started as a peaceful sit-in against the demolition of Taksim Gezi Park and spread in a matter of days to become a country-wide protest against the government and Prime Minister Recep Tayyip Erdogan. Soon after the initial display of opposition in the streets, it evolved into a series of sometimes violent encounters between the police and unarmed demonstrators.

The iconic photo of the woman in red being tear-gassed at close range went viral across the globe, instantly winning sympathisers for the protest movement. Her completely passive posture contrasted with the aggressiveness of the police officer firing tear gas straight at her face, suggesting a political climate of one-sided violence.

The revolt had gone viral faster online than in real life and suddenly started to have a global reach. Turks are not new to censorship, especially on the internet, as has been alleged by the anti-AK Party opposition for several years. But this time, for those looking for information during the first days of these dramatic events, the best place was the internet. Thousands of videos were posted and tweeted. Petitions and information about medical first aid circulated at a pace that matched the development of the events. Protesters filmed the events, posting simultaneously and sharing with the rest of the world. Twitter and Facebook became the most available and reliable incubators of eyewitness news.

Many users replaced their profile pictures with revolutionary images, updating their status with the appropriate hashtags. Suddenly, tens of thousands of people became news editors, choosing which information to share while live-streaming their opinions with each status update. 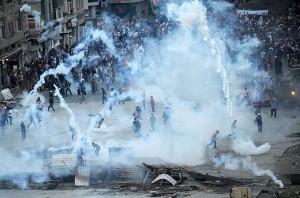 At first, news was almost totally absent in the mainstream Turkish media, apparently out of fear that the government would retaliate. While Taksim was being drenched with tear gas and American CNN was tuning in live to the events, the local channel CNN Turk was broadcasting a documentary about penguins. The images of the penguins next to the aggression taking place on the streets were so comical that it became a revealing juxtaposition for the protesters.

By now there is extensive mainstream media coverage of the protests, possibly because Ankara has decided that it had reacted too crudely earlier, and now is eager to restore public confidence. But CNN Turk’s penguin documentary epitomised media censorship and produced an immediate wave of hostile reaction online. Erdogan seemed fully aware of these realities, showing his anger and frustration in an extraordinary outburst:

“There is now a scourge that is called Twitter. The best examples of lies can be found there. To me, social media is the worst menace to society.”

Political satire has a strong tradition in Turkey, and Erdogan, with his blunt and impulsive style of speech, creates a lot of opportunities for comic criticism. The moment that came to symbolise the viral potential of the protests was when he used the slang word “chappuling” to describe the protesters as “looters” and “pillagers”. Using such a word created an instant reaction among the protesters, who proudly called themselves “chappullers” to mean those who “fight for one’s rights”.

“Every day I’m chappulling” became the theme of music videos that showed protesters dancing. Online mock English lessons were conjugating the word chappulling. Suddenly, a legion of chapullers emerged, dedicating themselves to realising democracy and promoting change. The protesters made great use of humour as their weapon of choice in responding to the tear gas of the police, spreading a message of empowerment that was at once entertaining and inspiring.

What is the viral potential of your message? Today, this question is perhaps becoming more relevant than the stated goal of a political movement. In some ways, we have US President Barack Obama to thank for this new theatre of politics. He was, after all, the pioneer of social media campaigning during his first presidential campaign in 2008. It was his contagious slogan “Yes, We Can” that initially mobilised support among the young via the internet.

Since 2008, social networking has come a long way, coming of age in the Arab Spring, especially in Egypt, and now migrating to Turkey. In 2012, there were 31 million tweets devoted to the election campaign in the US, compared to just 1.5 million four years earlier. Today, there are far more vehicles of social media for making one’s voice heard than there are stones to throw.

So the question remains: Will Gezi Park be demolished? We do not know. But one thing is for sure: We will always remember the chapullers.

Zeynep Zileli Rabanea is a freelance writer and translator currently living in Brazil. With a TV and film background, she is working on innovation and creativity projects in Brazil and Turkey.

The views expressed in this article are the author’s own and do not necessarily reflect Al Jazeera’s editorial policy.