Dissident groups stage demonstrations after death of 22-year-old man during clashes with police in country’s southeast. 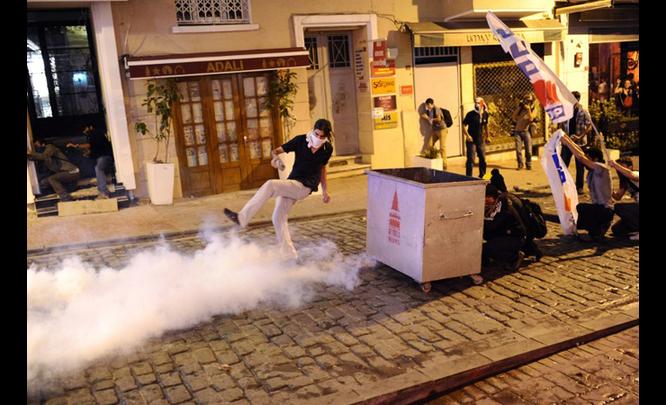 Anti-government protesters have gathered in Turkey after a demonstrator died during a protest in the southeastern province of Hatay.

Hundreds of demonstrators marched to Istanbul’s Taksim Square on Tuesday after Taksim Solidarity Platform, an umbrella group of Turkish dissidents, called for a gathering to mark the death of 22-year-old protester Ahmet Atakan the day before.

Dozens of riot police backed by water cannon advanced down a main pedestrian and some fired teargas canisters and plastic pellets into side streets as protesters fled.

In the capital Ankara, more than 1,000 people gathered in the central square of Kizilay before police used water cannon and teargas to break up the crowd.

Atakan died on Tuesday in a protest organised to show solidarity with students opposed to the construction of a road through a university in Ankara, the capital. The cause of his death is disputed.

Hasan Akgol, a MP from the opposition Republican People’s Party (CHP), told Reuters news agency by telephone that the protester’s death was caused by a weapon and he had two head wounds.

However, the Hatay governor’s office issued a statement on its website saying that police reported Atakan had fallen from a building to his death.

Turkish media reported protesters had thrown stones from rooftops at police vans passing on the street below.

Prime Minister Recep Tayyip Erdogan’s government has faced intermittent protests since late May, when a small environmental effort to stop the demolition of an Istanbul park expanded into the country’s fiercest protests in decades.

The demonstrations have largely cooled but occasional protests continue in Istanbul, Ankara and Hatay.

Tensions remain high in Hatay, a province of mixed ethnicities and religions that borders Syria, especially in recent weeks as the UN contemplates strikes against President Bashar al-Assad.