Four months after protests against the planned redevelopment of an Istanbul park devolved into a violent national uproar against the government, Turkish students are taking to the streets once again to fight an all-too-familiar scheme. 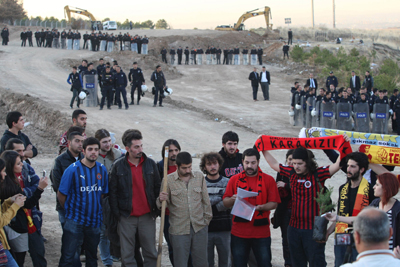 Turkish riot police fired on students with tear gas and water cannon as workers broke ground last week on a road that will intersect the campus of Middle East Technical University (METU), which contains the largest park in the capital of Ankara.

The authorities had hoped the cover of darkness and the Eid Holidays would deter them, but activists have been battling the project since September and amassed rapidly once an alert went out that work had begun.

The planned route, designed to alleviate a chronic traffic problem that chokes the city, will see 3,000 trees uprooted, and has received the full-throated backing of Prime Minister Recep Tayyip Erdogan.

“Nothing will stop the construction of this road. This road is civilisation,” he told ministers during a weekly meeting on Tuesday. “Even if we have to destroy a mosque, we will knock it down and rebuild it elsewhere. But the road will go ahead!”

Erdogan has referred to those opposed to the project as “modern-day bandits” and accused the opposition Republican People’s Party of stoking the atmosphere of revolt, a charge he has levelled against political opponents before.

In fact, the parallels to another contentious development of a Turkish park are somewhat uncanny.

June’s unrest at Gezi Park in Istanbul erupted when a peaceful sit-in against the destruction of the city’s main green space was met with a heavy-handed response that left at least six people dead and thousands injured in three weeks of clashes between protesters and police.

The violence spiralled into nationwide demonstrations against Erdogan and his ruling Justice and Development party (AKP), accused of repressing critics and forcing Islamic values on the mainly Muslim but staunchly secular nation.

Even Erdogan’s vice-premier, Bulent Arinc, has noted the obvious echoes between the two sites. “There are incidents at METU that remind us of what happened at Gezi,” he said.

The rector of the university, Ahmet Acar, described the decision to start construction as “illegal” and has promised to take the issue to court, and as the days go on the protests are expected to grow larger.

Solidarity vigils are already beginning. On Tuesday in the city of Eskisehir, west of Ankara, where student Ali Ismail Korkmaz was beaten so severely in June (allegedly by police) he eventually died of a brain haemorrhage, students gathered to plant trees in their own university’s park.

Round Two for Erdogan?

These are the green shoots of a secular and liberal dominated protest movement that has lain relatively dormant for the last few months.

“As with Gezi, it’s not just about trees being uprooted,” Zeki Ulkenli, professor of town planning at METU, told AFP. “It’s the entire platform of this government that’s in question.”

The movement has a formidable foe in Erdogan, even with an image tarnished by what Amnesty International described as “gross human rights violations” committed in June, including the use of live ammunition, tear gas, water cannon, plastic bullets and beatings.

“Some people don’t seem to have learned their lesson from Gezi,” said Jean Maurice Rippert, the European Union’s ambassador to Turkey, on Monday.

And some see Erdogan’s bloody-minded attack on opponents of the road project at a progressive institution as holding a particular significance for the conservative Islamic-rooted premier.

“Prime Minister Erdogan is leading a punitive raid against METU, as he has done against other institutions that have been focal points for protest against him,” said a young professor at the university on condition of anonymity.

But, he warned, “This place can resist.”