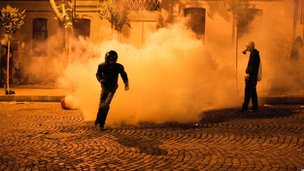 The protests were originally sparked by plans to build on an Istanbul park.

Turkey’s main share index closed 10.47% down following investor concerns over the escalation of anti-government protests over the weekend.

The Borsa Istanbul 100 index tumbled as investors feared the demonstrations could hit the economy, and the Turkish lira fell to 16-month lows.

Demonstrators nationwide clashed with police after water canons and tear gas were used to control crowds.

The protests were originally sparked by plans to build on an Istanbul park.

As well as sharp falls in the stock market, there was also a big rise in the cost of insuring Turkey’s debt against default.

“The risk clearly is that this all just drags on. I would expect the Turkish authorities, particularly the central bank to be active in re-assuring investors,” said Timothy Ash, head of emerging markets research at Standard Bank.

Turkey’s central bank cut its main interest rates by 50 basis points last month in a bid to stimulate the faltering economy. The central bank has been trying to boost its economy with rate cuts since the middle of last year when economic growth slowed sharply.

However, in a significant boost for the emerging economy country, Turkey was upgraded by Moody’s last month, making its debt investment grade for the first time in two decades.

The rating agency credited its upgrade to “structural improvements and institutional reforms in the economy as well as public finances”, which it said would better insulate Turkey from external shocks.

However, Robert O’Daly, Turkey analyst at the Economist Intelligence Unit, told the BBC that the attractiveness of investing in Turkey was now under threat.

“These protests could have a substantial impact. Aside from short-term volatility on stock portfolios, the wider issue for Turkey will be the difficulty of attracting foreign direct investment, such as for real estate projects.”

Mr O’Daly said investors were likely to put investment decisions on hold until the situation in Turkey became clearer.

Protests over the demolition of Gezi Park to make way for the rebuilding of an Ottoman-era barracks, reportedly to house a shopping centre, began on a small scale earlier this week, but have escalated into violent demonstrations.

Protesters said the park was one of the few green spaces in Istanbul, and were angry at the loss of public space for commercial purposes.

The interior minister said that 1,700 people had been detained in the nationwide unrest.

Mosques, universities and shops are being turned into makeshift hospitals to deal with the injured.