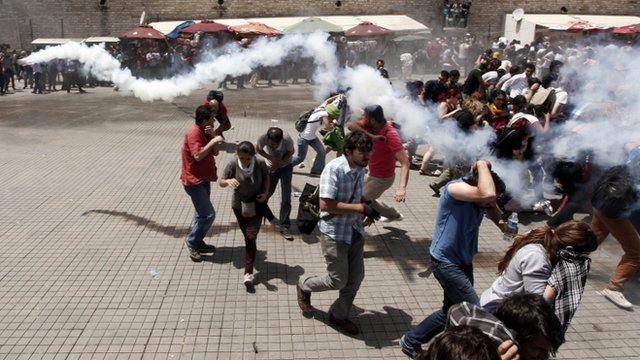 Turkey has entered a second day of violent protests, with fresh clashes between police and demonstrators in Istanbul and the capital, Ankara.

The unrest began as a sit-in over plans to redevelop Gezi Park in Istanbul’s Taksim Square, but escalated after police used tear gas.

Tear gas was again fired on Saturday at protesters in Istanbul and Ankara.

In a defiant speech, PM Recep Tayyip Erdogan insisted that the park project would go ahead.

He also said that police would remain in Taksim Square to preserve order.

Correspondents say that what began as a local issue has spiralled into more widespread anger at the government and ruling Justice and Development (AK) Party.

Hundreds of demonstrators marched over the bridge connecting the Asian and European shores of Istanbul on Saturday morning to try to reach the main square.

Police fired tear gas to try to disperse them and some protesters threw rocks.

Clashes were also reported in the Besiktas district.

One Istanbul resident, who gave her name as Lily, told the BBC’s World Service: “There are 40,000 people crossing the bridge between Asia and Europe today. All the public transport is on lockdown.”

She said that police had dropped tear-gas canisters from helicopters overnight.

“About half past one the entire city started to reverberate. People were banging on pots, pans, blowing whistles,” she said.

The BBC’s Louise Greenwood in Istanbul says police from as far afield as Antalya are being drafted in to help quell the violence.

She says the central Taksim district and surrounding areas remain cordoned off and bridges are closed to traffic.

In Ankara, hundreds of demonstrators gathered at a park, many drinking alcohol in protest at recent government restrictions on its sale and advertising.

Some chanting anti-government slogans tried to march on parliament but were dispersed by police.

In a speech to the exporters’ union on Saturday, Mr Erdogan vowed order would be restored “to ensure the safety of people and their property”.

He said: “Police were there (Taksim Square) yesterday; they’ll be on duty today and also tomorrow because Taksim Square cannot be an area where extremists are running wild.”

Mr Erdogan accused protesters of using the issue as an excuse to create tension.

Many postings on Twitter have complained angrily about the lack of media coverage of the protests within Turkey.

The US has expressed concern over Turkey’s handling of the protests and Amnesty International condemned the police’s tactics.

Demonstrators had gathered in Gezi Park on Friday to contest the controversial redevelopment project aimed at easing congestion around Taksim Square, which involved uprooting trees.

Opponents of Mr Erdogan’s plans say the park is one of the few green areas left in central Istanbul. 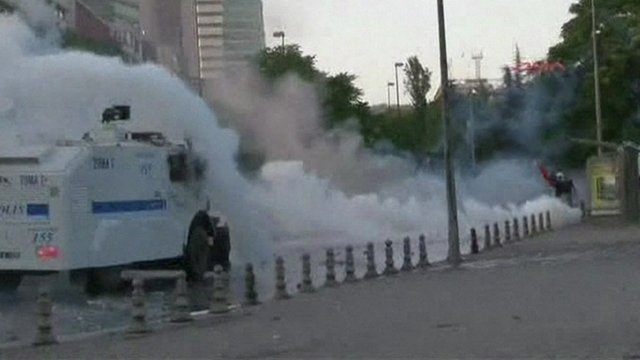 Protests in Ankara continued into Saturday

Istanbul’s governor said a dozen people were admitted to hospital and more than 60 people detained after Friday’s clashes.

Correspondents say the park issue has helped highlight unhappiness among young people towards the government and AK Party over what they see as creeping Islamisation.

Last week, Turkey’s parliament approved legislation restricting the sale and consumption of alcoholic drinks between 22:00 and 06:00.

The prime minister’s AK Party has its roots in political Islam, but he says he is committed to Turkey’s state secularism.

Mr Erdogan has been in power since 2002 and some in Turkey have complained that his government is becoming increasingly authoritarian.

Earlier this month, riot police clashed with tens of thousands of people attempting to hold a May Day march in Istanbul.